The Department of Conservation (DOC) is asking the public for help following the recent shooting of an endangered New Zealand sea lion/rāpoka/whakahao on Stewart Island.

The Department of Conservation (DOC) is asking the public for help following the recent shooting of an endangered New Zealand sea lion/rāpoka/whakahao on Stewart Island.

The young male sea lion was found dead on the island on 30 April, but the recent autopsy and pathology report has only just revealed that it was shot.

DOC’s Conservation Services Manager for Stewart Island/Rakiura, Brent Beaven, says, “He had been shot twice between the shoulder blades, but had not been killed outright. Both shoulder blades were fractured and the wounds were infected, plus he was also pretty thin, so we think he probably survived in pain at least three days before dying.”

“Our sea lions are endangered (nationally critical). They are only found in New Zealand and their numbers are declining. There are only around 10,000 of them left and most of these are on the subantarctic islands, with only a few hundred on the New Zealand mainland,” says Brent.

“New Zealand sea lions are known to sometimes be boisterous and appear aggressive, but this is mainly bluff and bluster or curiosity. If a few simple rules are followed, they pose no danger to humans. In fact, many tourists (without guns) enjoy interacting with these animals every year in the NZ subantarctic islands and on the Otago Coast.” 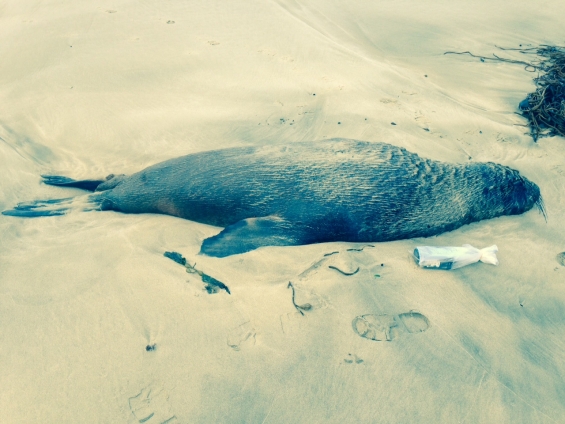 “This is a cowardly act. This person has shot this animal twice and then left it to suffer for days. We need the public to help us safeguard vulnerable marine mammal species. If anyone has any information about this Stewart Island incident they should contact the police or 0800 DOC HOT (0800 362 468).”

It is less than a year since a female sea lion was shot at Port Adventure, Stewart Island.