Endangered whio, or blue duck, continue to thrive in the mountainous rivers and streams of inland Hawke’s Bay, according to a survey conducted by the Department of Conservation.

Endangered whio, or blue duck (Hymenolaimus malacorhynchos), continue to thrive in the mountainous rivers and streams of inland Hawke’s Bay, according to a survey conducted by the Department of Conservation (DOC).

Three years after an initial survey prompted DOC’s Whio Recovery Group (WRG) to classify the catchment areas of the Waiau and Te Hoe rivers as a whio ‘Recovery Site’ a second survey has validated the decision.

The census, conducted in January this year, found 18 breeding pairs along 33km of waterway bordering the Forest Lifeforce Restoration Trust’s 6,120 hectare Maungataniwha Native Forest, compared to 19 pairs along 41km in 2011. 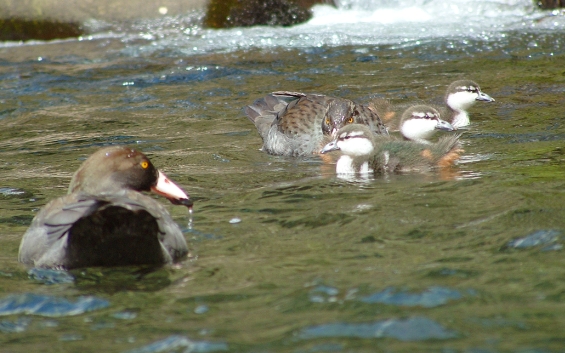 “We surveyed some rivers this year that we didn’t look at in 2011, and vice versa,” said the study’s co-ordinator, DOC biodiversity ranger Helen Jonas. “Some rivers we did more of this year, and some less of. So we can’t make an apples for apples comparison.

“But the advantage of this is that we can say for sure that the encouraging outlook we discovered for whio in this part of New Zealand in 2011 remains the same today.”

In 2011 Jonas and her team used a dog to help sniff out the ducks. This year they did not. It is possible that a dog would have turned up more ducks than the human searchers did.

“When it comes to finding whio nothing can beat a pooch,” Jonas said.

The FLR Trust’s work with whio at Maungataniwha is funded by Genesis Energy as part of the Whio Forever project – a five year $2.5 million dollar programme, managed by DOC, which will double the number of secure breeding sites around the country.

At Maungataniwha whio are benefitting from the extensive predator trapping undertaken by the FLR Trust in support of its Maungataniwha Kiwi Project, one of the most prolific and successful kiwi conservation initiatives in the country.

At 0.54 pairs per kilometre the Maungataniwha whio population density is more than double the average density of other Recovery Sites.

Similar whio densities at the FLR Trust’s nearby Pohokura property, and duplicated in informal counts elsewhere at Maungataniwha, indicate that relatively substantial populations are likely to exist across the southern Whirinaki and Te Urewera ranges according to Pete Shaw, FLR trustee and Maungataniwha Native Forest estate manager.

“We’re hoping these results indicate at least a partial plateau in the decline of whio across inland Hawke’s Bay,” Shaw said.

The survey consisted of walking in or alongside rivers and streams, crisscrossing them and, in some cases rafting or tubing them, to look and listen for sign such as faeces and calls. Features such as likely roost areas with protective overhead cover were examined particularly closely.

The FLR Trust’s work with whio at Maungataniwha complements its whio secure breeding project on its nearby property at Pohokura. In addition to these initiatives and the Maungataniwha Kiwi Project it runs a series of native flora and fauna regeneration projects. These include a drive to increase the wild-grown population of Kakabeak (Clianthus maximus), an extremely rare type of shrub, and the re-establishment of native plants and forest on 4,000 hectares currently, or until recently, under pine.