The owner of two dogs found hunting and killing wildlife in the Ahuriri Estuary was successfully prosecuted recently.

The owner of two dogs found hunting and killing wildlife in the Ahuriri Estuary was successfully prosecuted recently.

An officer from the Ministry of Primary Industries observed two dogs pack hunting in the estuary and called Napier City Council Dog Control. The dogs were impounded after catching and killing a shag.

Dave Carlton, DOC Conservation Services Manager said that while it was unfortunate the dogs had dug under a fence it showed how important it was for all dogs to be securely fenced and under control at all times. “This is something the department struggles with” he said, “despite signs and rangers talking to the public, people are still not taking the ‘dogs on leads’ seriously.”

The dogs were returned to their owner after agreement that they were reclassified as dangerous and menacing. This has placed special requirements on the owner. A $200.00 fine was paid to the local Forest and Bird Society and the owner has committed to doing community service for the department.

While the Ahuriri Estuary has a walkway through it, parts of it are through wildlife refuge and people were required to have dogs on leads in this area. When in ‘off lead exercise’ areas dogs must still be under control at all times. Signs on the track advise people of the requirements. A brochure that clearly sets out the rules is obtainable from the local DOC office or DOC web site.

The estuary provides important feeding and resting areas for over 70 species of resident and migratory waterbirds. Many of these birds, such as godwit, knot and golden plover, migrate here to escape the northern hemisphere winter. It is crucial therefore, that some areas within the estuary remain undisturbed in order to provide areas for migratory waders to recover from their incredible journey. 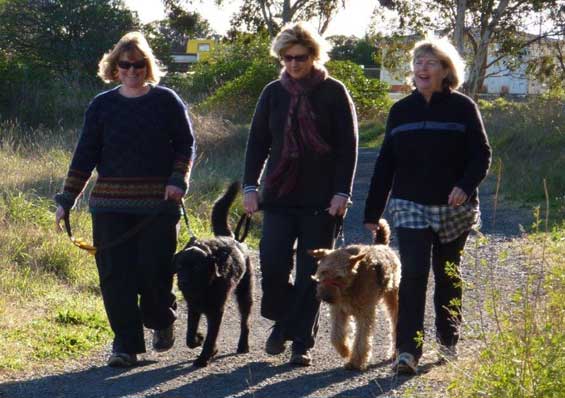