DOC has begun a precautionary programme of vaccinating West Coast kiwi chicks in response to the death of seven young birds on Rona Island crèche in Lake Manapouri.

DOC has begun a precautionary programme of vaccinating West Coast kiwi chicks in response to the death of seven young birds on Rona Island crèche in Lake Manapouri.

Ten Haast tokoeka kiwi chicks were transferred to the predator-free island in January and February to enable them to grow large enough to defend themselves against stoats.

Over the past weeks seven kiwi have been found dead and pathology results from Massey University have shown that for one bird an infection known as erysipelas is the likely cause of death. 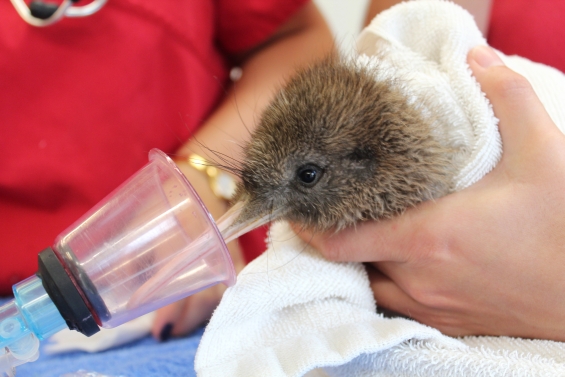 Department of Conservation vet Kate McInnes says the risk of erysipelas in birds is usually low.  Healthy birds appear resilient to the disease but it can prove fatal to young or stressed individuals.

She says DOC has decided to take a precautionary approach with our rarest kiwi using antibiotics and vaccinations, which are effective in treating and preventing erysipelas.

“Even though the bacterium has only been found in one bird, this is a preventable infection and we want to give every kiwi chick the best start in life.”

“The occurrence of erysipelas appears restricted to Rona Island but we have decided to vaccinate all Haast tokoeka and rowi BNZ Operation Nest Egg chicks as a precaution.”

These birds—17 Haast tokoeka and 44 rowi—have received the first of two vaccinations against erysipelas with the help of the West Coast Wildlife Centre and Pacific Vet Ltd in Christchurch, which donated the vaccine.

Tests for erysipelas came back negative for six of the seven dead birds. Parasites and emaciation appear to have caused the deaths of two of these kiwi. Despite extensive testing, the cause of death for the four other birds was inconclusive.

The remaining two live chicks from Rona Island have been sent to Wellington Zoo for precautionary treatment and monitoring and are doing well.  The tenth bird was unable to be located (a signal could not be picked up from its transmitter).

DOC Senior Ranger James Livingstone says the deaths highlight the challenges in trying to protect young Haast tokoeka kiwi but that overall the intensive management programme was benefitting the species.

“It’s always very disappointing to lose chicks and we will be considering new procedures such as preventive vaccination to limit the risk of erysipelas to our young birds in the future.”

“But overall this season we still have a 60% survival rate through the BNZ Operation Nest Egg programme.  Without active management this would be less than 5% due to predation in the wild.”

The Department will assess Rona Island as a safe place for kiwi before birds are returned there.

An infection caused by a bacterium commonly found in soil that can infect birds through ingestion or skin wounds.  Birds that are stressed or have low reserves (e.g. small or thin) are more susceptible to infection, and this usually shows up as a sudden death from septicaemia (blood poisoning).

A 60 hectare island has been used as a crèche site for Haast tokoeka chicks since 2008 with 67 chicks successfully grown there previously.  Work to restore the predator-free island has been carried out by the Pomona Island Charitable Trust.

This operation has boosted the survival rate of Haast tokoeka chicks to 70%.  Only 5% of chicks survive in the wild without management.  Haast tokoeka is critically endangered with about 400 birds.

Under this programme eggs taken from the wild in the Haast tokoeka sanctuary (the Arawhata River catchment south of Haast) are incubated at the West Coast Wildlife Centre before being released in kiwi crèche such as Rona Island and Centre Island in Lake Te Anau.

The trading name of The Kiwi Trust. Established in October 2012, it continues more than two decades of work by BNZ Save the Kiwi Trust to help protect kiwi and the places they live. Kiwis for kiwi raises and distributes funds to community, DOC and volunteer groups helping save kiwi throughout the country.

Kiwis for kiwi works in partnership with the Department of Conservation (DOC) with a vision to take kiwi from endangered to everywhere.

Our work with kiwi

Our overarching goal is to restore and, wherever possible, enhance the abundance, distribution and genetic diversity of all kiwi species.