An advanced version of a self-setting stoat trap is being trialled to control rats during a plague event as part of the Department of Conservation's predator control programme.

An advanced version of a self-setting stoat trap is being trialled to control rats during a plague event as part of the Department of Conservation's (DOC) predator control programme.

The A24 self-setting trap has been pioneered by Wellington-based industrial design company, Goodnature, with support from DOC, and uses a gas-powered mechanism to automatically reset itself after activation. 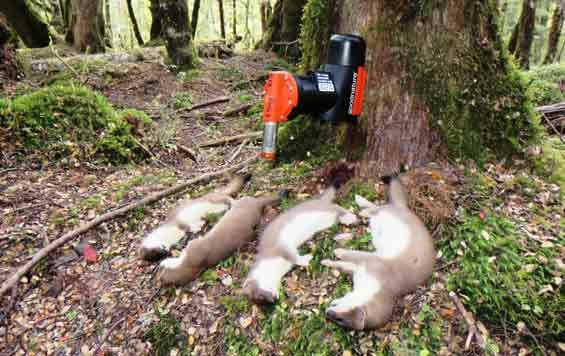 DOC and community groups have been using and trialling the traps throughout New Zealand for the last four years, providing feedback to Goodnature to refine the traps and lures.

An area of 200 ha in Fiordland's Kepler Mountains has been selected as a project site for the latest version. This project will test 467 traps baited with a chocolate-based lure to discover whether they control rat numbers during a plague and then hold numbers down over time. 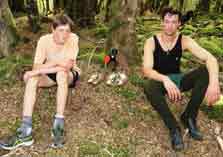 The Fiordland Conservation Trust and Kids Restore the Kepler programme is helping to run the project and DOC has contracted Fiordland College student Tim Barrow to check the new traps in December and January.

The project will run for a year and, if successful, will be expanded to use the same number of traps over double the area in the Kepler.

"These traps are a key tool for now and the future, they are humane, non-toxic and reduce our precious labour costs allowing us to do even larger areas," Darren said. Self-setting traps slash conventional trap costs by up to 75 percent."

The self-setting trap project is funded and supported by the Future of Predator Control Unit within DOC, working alongside Zero Invasive Predators (ZIP), a new DOC partnership between the Next Foundation, DOC, and philanthropists Gareth Morgan and Sam Morgan to develop tools and systems to permanently remove introduced predators.

Seven projects managed by DOC and community groups throughout New Zealand have trialled the self-setting traps over the past two years and all have reached their targets for controlling rats and possums. A trial of the latest version of self-setting traps and lures in two North Island forests last season knocked rats down to zero densities in only a few months.

A final report on the effectiveness of the trap by DOC predator scientists is due next year.

DOC uses ground pest control and trapping over 2 million ha in New Zealand and is aiming to have permanent networks in place to control pests.

The A24 rat and stoat controller

The A24 is toxin-free and works by striking the skull of the pest animal with a piston, killing it instantly. It is a gas-powered, tree-mounted, re-setting killing device. It exceeds National Animal Welfare Advisory Committee (NAWAC) and MPI guidelines for a humane kill trap.

It has a CO2 powered piston, which is tripped when the target pest enters the trap. The head is crushed instantaneously and the dead animal promptly falls to the ground as the trap resets. The trap can reset itself up to 24 times per CO2 canister. It is baited with a long-life lure.

The A24 trap is specifically designed to work with stoats and rats and another trap, the A12, has been designed to target possums. The traps will help to reduce labour costs compared to servicing a conventional kill trap. It can also kill mice.

A self-setting trap remains available to kill further pests even after the first animal has been killed. Traditional traps kill only one pest animal per human reset, meaning critical opportunities to control pests may be missed.