The Department of Conservation (DOC) has just completed its annual weed control of invasive exotic trees in the Hunter Valley within the Hawea Conservation Park.

The Department of Conservation (DOC) has just completed its annual weed control of invasive exotic trees in the Hunter Valley within the Hawea Conservation Park.

Biodiversity Senior Ranger Paul Hondelink has been spraying weeds since the beginning of DOC’s wilding tree control operations in the Wanaka region in the early 1990s.

“The big advancements in wilding pine control techniques such as boom spraying and basal bark treatment, has enabled us to achieve so much more”, said Paul.

“The gains we’ve made in the headwater catchments of the larger valley systems and high priority sites, mean we can broaden our wilding tree operations.” 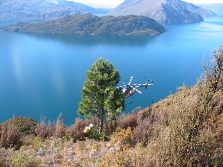 The Wanaka region DOC was proactive in the early days with managing wilding pines and other invasive plants. By the 1990s chainsaw teams of up to 5 people were dropped by helicopter to remove large mature trees. The helicopter would hover while the DOC worker would chainsaw the tree down, then be picked up and moved to the next tree. This method was called “skid hopping” and was labour intensive but effective in removing big seeding trees.

“It was managed as a high risk operation involving multiple staff, chainsaws, helicopters, long days and hard work on steep terrain”, Paul said. “But it was worth it”, as now most of the wildings in the priority sites are reduced to the odd seedlings treated by helicopter spot spraying. This technique is effective and efficient. Large areas can be treated over a short time with only one staff member required. 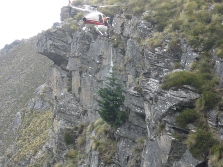 Fine tuning the treatment has meant a huge reduction in chemical required. Now trees are sprayed only on their stem/ trunk instead of “foliage spraying” the entire tree. This new method means that 80ltr of chemical will last 3 hours of work rather than 30 minutes as was the case when foliage spraying.

The invasive species that are targeted include wilding pines, gorse, broom and buddleia. All of these species if left would dominate the ecosystem and displace native flora and fauna. Without control the unique landscape of Wanaka region would be altered dramatically within our children’s lifetime.

The largest of the priority areas that are treated include the Pisa Range, Cardrona Valley, Matukituki Valley, Mt Alta and The Stack conservation areas.