The kiwi was sent for autopsy to Massey University, where the evidence showed that the death was likely to have been caused by dog attack.

Department of Conservation biodiversity ranger, Jerome Guillotel, said "We have come across many lost dogs in the forest over the last ten years and felt lucky not to have had any proven dog attack on our transmitter-wearing kiwi previously. This has come as no surprise to us." 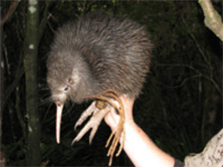 "One dog can have a devastating effect on a kiwi population as it has been the case in other kiwi populations particularly in Northland. 'Goff' has been monitored in Tongariro Forest for nine 9 years and the death of an adult kiwi such as this is a setback for the project and the kiwi population."

It is unclear why the dog that caused the death was present in the forest, although the forest is used regularly by dog owners for hunting. Hunters in Tongariro Forest require a DOC issued hunting permit and when using dogs, they must be kiwi avoidance certified.

Situated within the Tongariro Conservation Area, is the Tongariro Forest Kiwi Sanctuary, and while many dog owners have had their animals put through the kiwi avoidance training programme, and do have the necessary permits, the death of Goff is a reminder to remain vigilant when taking dogs into areas where kiwi could be present.

Putting their dogs through kiwi avoidance training is one way dog owners can reduce the potential harm to kiwi that dogs pose.

Dogs find the scent of kiwi irresistible and can easily inflict damage to them as the kiwi’s lack of a breastbone means that even a nudge or playful bite can cause fatal injuries. Any dog, small or large, can kill a kiwi. It can only take a moment for an unattended dog to cause serious damage or death.

As well as getting dogs kiwi avoidance trained, it is recommended that owners have their dogs retrained annually.

While it will help, kiwi avoidance training is not a fail-safe method. Even after it has been trained, an uncontrolled or roaming dog may still attack kiwi, especially if it is not regularly retrained. The best option is simply to keep dogs away from places where wild kiwi live.

In addition to avoidance training, all dogs must be obedient, and not roam unattended. Any lost or roaming dogs must be reported to the nearest DOC office as soon as possible with the location, description, and GPS coordinates if possible. The longer that uncontrolled dogs are left to roam the greater the threat to kiwi and other wildlife they become.

If you are planning to hunt on any public conservation land you require a certificate showing that your dogs are certified to avoid kiwi, and a hunting permit from DOC. No dogs are permitted in the Tongariro National Park. Many private land owners also now choose to allow access to hunters with kiwi avoidance trained dogs. Permits and certificates must be carried when hunting.

To find out more about kiwi avoidance training in the Tongariro area, see Avoidance training for dogs or contact the Department of Conservation at whakapapa@doc.govt.nz or phone +64 7 892 3729.