DNA tests on newly-discovered, nearly extinct plants have given researchers the most complete picture yet of how the critically-endangered kakabeak (Clianthus maximus, or ngutukākā in te reo) is clinging to survival on the inaccessible cliffs, bluffs and ledges of New Zealand’s wild back-country. 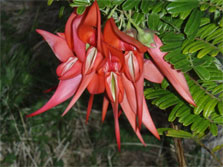 The deep red flowers of the kakabeak, curved like the beak of the parrot after which they’re named, hang in heavy bunches

DNA tests on newly-discovered, nearly extinct plants have given researchers the most complete picture yet of how the critically-endangered kakabeak (Clianthus maximus, or ngutukākā in te reo) is clinging to survival on the inaccessible cliffs, bluffs and ledges of New Zealand’s wild backcountry.

The tests, conducted by Dr Gary Houliston, a plant geneticist at Landcare Research, found distinct groups of plants in clearly defined areas. The Forest Lifeforce Restoration Trust (FLRT), a conservation trust working with the Department of Conservation (DOC) to prevent the extinction of the kakabeak, will use this information to re-stock conservation land with genetically diverse plants it is rearing from wild seed.

Until recently only about 110 naturally-seeded kakabeak were known to exist in the wild but earlier this year a DOC-led field trip to Ruakituri, a part of inland Hawke’s Bay where only six wild plants had previously been known to exist, yielded 18 more.

DOC ranger Helen Jonas said: "The Department had four people searching for kakabeak during the flowering period last season. The plan is to follow this up in the new year with aerial searching, using a helicopter to continue to look for this rare and important species."

Tests on these most recent discoveries have resulted in the most complete genetic picture of the nearly extinct New Zealand native that anyone has ever had.

“We now have DNA data from pretty much every accessible wild kakabeak known to us,” Dr Houliston said. “This allows us to make sensible, science-based decisions about what mix of plants from FLRT’s seed stock should be used in restoration plantings.”

FLRT forest manager Pete Shaw said the trick would be to strengthen the genetic pool of each distinct group by introducing young plants with different genetic composition.

“The genetic diversity of any plant population is a good indicator of that population’s strength,” Shaw said. “The fact that these plants were out there highlights the value of continued field searching.”

FLRT and DOC have recently called for hunters, anglers, trampers and rafters to keep their eyes out for kakabeak while in the bush. Any sightings of the flamboyant plant, which is typically found clinging to cliffs and inaccessible bluff systems and which carries heavy bunches of large, curved bright red flowers in spring, should be reported to the nearest DOC office. Seeds from any new plants are particularly valuable as they widen the pool of wild-grown seed that can be used in propagation efforts.

About the Forest Lifeforce Restoration Trust

The Forest Lifeforce Restoration Trust was established in 2006 to provide direction and funding for the restoration of threatened species of fauna and flora, and to restore the ngahere mauri (forest lifeforce) in native forests within the Central North Island.