A joint 10-year NIWA and Department of Conservation project to find out more about the great white sharks that inhabit New Zealand waters is coming to an end as scientists tackle the final phases of data analysis.

A joint 10-year NIWA and the Department of Conservation project to find out more about the great white sharks that inhabit New Zealand waters is coming to an end as scientists tackle the final phases of data analysis.

NIWA fisheries scientist and shark expert Dr Malcolm Francis is one of several scientists who have spent the past decade tagging great whites – a protected species - and following their movements.

Since 2005, 95 sharks were tagged, mainly at the Chatham Islands and Stewart Island and some surprising discoveries made. 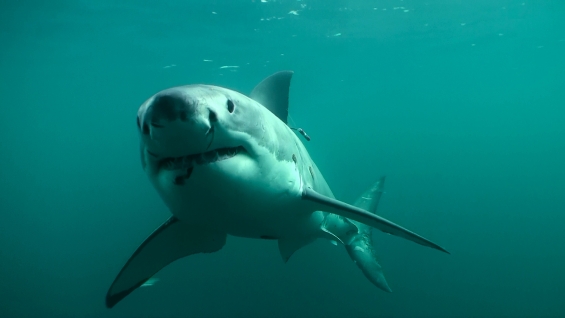 Dr Francis said the initial aims of the project were to find out how mobile the sharks were, how far they travelled and where to, and their habitat requirements.

“We found that most migrate to the tropics during winter. The first one or two we saw do this came as a real surprise. They go between May and July and return between December and March, spending more time out of New Zealand waters than in,” Dr Francis said.

Just last week, a 3.3m-long great white named Pip by the researchers, arrived in New South Wales near Sydney, with tracking data showing she took 20 days to travel 2020km from the southern Snares Shelf. She has since moved steadily northwards, and recently entered Queensland waters.

Another shark, a 3.7 m female named Caro, has been hanging around Stewart Island for several months but is expected to begin her overseas migration shortly.

By comparison, great white sharks that live around the southern Australian coast travel mainly up the east or west coasts, but do not often venture into the open ocean.

The New Zealand tagging also showed that the sharks travel in a remarkably straight line on their migrations, averaging about 5km/h or 100 km/day, but have done up to 150km a day. In the afternoons they tend to spend time at the surface but also make regular dives between 200 and 800m – the record depth is 1246m.

“We don’t know why they’re doing that, we assume they’re feeding. We also don’t know how they navigate in a straight line or why. It’s a big puzzle and not one we are likely to work out.

“While we’ve found out some answers to some questions, our work has also raised a series of other questions. We’ve found out about the large scale, and where and when they hang out around northern Stewart Island, but not what they do close to mainland New Zealand.

Clinton Duffy, shark scientist with the Department of Conservation, says “We confirmed that juveniles inhabit shallow coastal waters and harbours around New Zealand, feeding mainly on fish. Once they grow to about 3 m long, the sharks begin to feed on marine mammals. They continue to feed on fish on squid but they tend to aggregate near seal colonies, so there are large behaviour changes.”

The tagging programme has involved the use of acoustic tags, useful for determining how the sharks use their habitat near seal colonies, pop-up tags that gather data on light, depth and temperature, and electronic tags attached to a shark’s dorsal fin to track their movements.

Every shark is different. Mr Duffy has a database of more than 100 sharks identified from their colour pattern and the shape of the dorsal fin. Some familiar faces are seen each year at tagging time, because many sharks return annually to the same place. However, the researchers also see new sharks each year at Stewart Island, indicating that there are some residents and some transients. This makes estimating the size of the population, and whether it is changing, very difficult.

“Biologically white sharks are fascinating; the opportunity to tag them and find out their migratory behaviour over the past decade has been incredibly interesting and valuable.”