A large dead whale has washed up on the rocks at Tapuae Beach, just south of New Plymouth.

A large dead whale has washed up on the rocks at Tapuae Beach, just south of New Plymouth.

At around 20-25 m long the whale is believed to be a blue whale – the largest species on earth.

Reports from local commercial fishermen and a ship leaving Port Taranaki indicate that the dead whale may have been floating close off the Taranaki coast since at least Sunday.

Department of Conservation Acting Senior Biodiversity Ranger Callum Lilley said it’s uncommon, but not unusual, to get large whales washed up along the coastline.

“There have been five dead blue whales washed up on the North Island’s west coast between Wellington and Northland in the past five years, and a dead whale washed up on Waiinu Beach near Whanganui in 2011.”

High tide limited the time rangers could access the whale today but a thorough examination will be undertaken tomorrow morning.

“It’s often hard to determine cause of death”, said Mr Lilley. “We are bringing in experts from Massey University to do a post-mortem examination which may give us a better idea.”

Local iwi members have been to bless the whale. 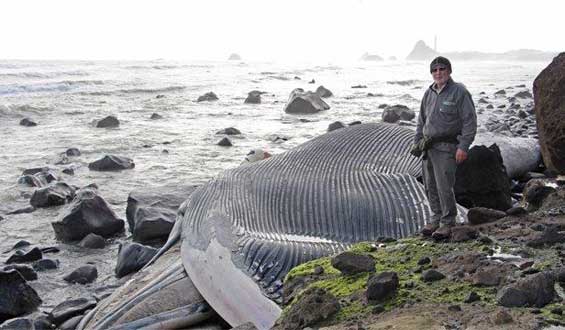