A software app that’s helping save a bird rarer than our kiwi won the Environment and Sustainability category of NZ’s Spatial Excellence Awards last night in Wellington.

A software app that’s helping save a bird rarer than our kiwi won the Environment and Sustainability category of NZ’s Spatial Excellence Awards last night in Wellington.

Whio is a species of native duck only found in New Zealand’s fast flowing waters. It is estimated there are fewer than 2500 birds left.

The  ‘Whio Manager’ was developed by the Department of Conservation (DOC) and Genesis Energy, and is used by DOC staff and the many volunteers involved in the Whio Forever partnership.

“Whio Manager is a great tool because it enables us to better manage our trapping information and bird count, and it’s user-friendly so our many partners and volunteers can easily use it.”

Mr Mudford acknowledged the significant work and personal commitment of DOC’s Geospatial team, led by Norm Thornley, the hard work of the rangers, volunteers and contribution of DOC’s corporate partner in this project, Genesis Energy.

The app is enabling conservationists to work smarter, harnessing the power of GPS to manage the trapping of rats and stoats that are the whio’s biggest threat. The app also enables a smarter bird count, with data fed directly into a national database, giving a more accurate national picture of the whio population.

Thanks to the app – and a multitude of volunteers, Genesis Energy, DOC and supporting organisations  –  Whio Forever’s target number of breeding pairs has been revised: the project will now reach its 2019 target in 2016. 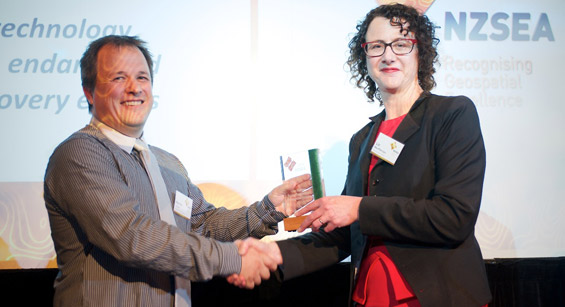 More information about the app

How does it work?

The app is loaded onto a hand-held device known as a Trimble. Trappers and bird counters load information onto their Trimble when working in the field. Once they are in an area with internet connection the data is automatically synced via wifi to the national database.

What do our rangers think?

“The Whio Information Management app is an incredibly useful tool. It saves a lot of double and, in some cases, triple-handling of data. It’s easy to work with and anyone can learn the basics for inputting and retrieving information very quickly.” —  Andrew ‘Max’ Smart, Biodiversity Ranger, Fiordland. 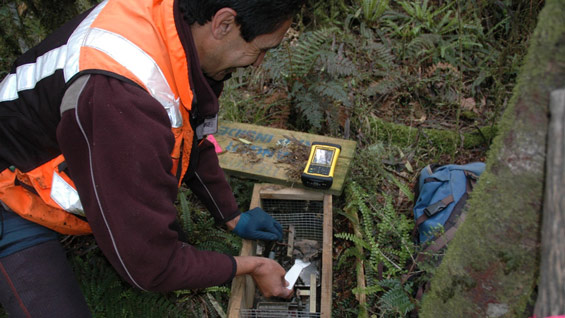 How do trappers use it?

Leon is a stoat trapper and lives off the grid in the Retaruke Valley. As part of the Kia Wharite initiative to employ tangata whenua he is contracted by Horizons Regional Council to trap stoats on the Retaruke River. Once a week he travels into Taumaranui for his weekly groceries. While there he pulls up beside the public library where his Trimble uses the free Wifi to sync his trapping data and GPS track log; it also provides evidence of the work performed and Leon is paid accordingly.

Field workers survey a local whio population for individuals, pairs and juveniles on a stretch of river, recording locations and attributes of the birds they sight. On returning to a location with internet access (including cellular if the device is capable), the device is synchronised with the Whio Database.
In the office, whio site administrators access the Whio Forever web-based data management portal where they can review data collected, enter paper-based records if necessary, and plan for additional visits.

At the end of the monitoring season automated reports can be generated detailing the national picture of the managed whio population broken down by site and season, with pairs observed at each site, and juveniles produced at age classes between hatching and fledging.

Geospatial technologies provide the ideal suite to enable the collection of quality data in an intuitive manner in remote disconnected environments - then enable that data to be seen and managed by wide range of distributed people across the internet with secure centralised storage.

And having all the data available to the whio recovery community - from rangers and volunteers to corporate partners and scientists - creates a sense of inclusion in the national effort. 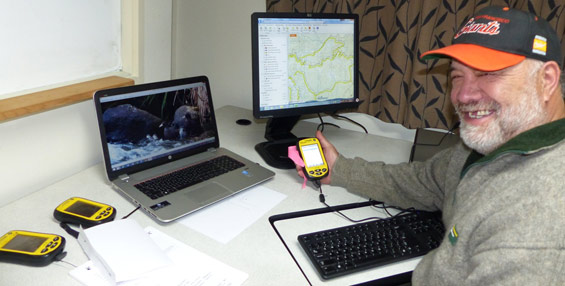