An important mōhua or yellowhead population in the Catlins is on the increase after a successful joint agency pest control programme last spring. 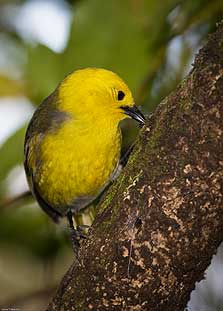 An important mōhua or yellowhead population in the Catlins is on the increase after a successful joint agency pest control programme last spring.

In August TBfree New Zealand and DOC worked together to treat 47,000 ha of forest in the Catlins with aerial 1080 to knock down possums, rats and stoats.

DOC’s focus was to control rats and stoats to protect mōhua in 10,000 ha of beech forest, while TBfree New Zealand targeted possums to control bovine tuberculosis (TB) over 37,000 ha surrounding this area.

DOC Conservation Services Manager David Agnew says monitoring results show that mōhua have increased to the highest level recorded since the population suffered a big decline about 14 years ago.

“Surveys in October and November last year show the population is recovering well after the pest control in August.  We found more birds and they have expanded into areas they used to be found in.”

The opportunity to piggy-back on the TBfree operation when rat levels were on the increase meant that mōhua could be protected right at the start of their nesting season in October when they were most vulnerable,” says David Agnew.

“Treating a much larger area at one go had the benefit of slowing the reinvasion of predators as well as significant cost savings from shared planning.”

The co-ordinated operation considerably decreased possum numbers, the main source of TB in livestock, and helped maintain the progress already made in reducing the risk of TB-infected wild animals spreading the disease to farmed cattle and deer in the surrounding area.

Rat levels, which were tracking at between 14% and 18% in mid to low-altitude forest areas in August, fell to undetectable levels in November after 1080 treatment.  Possum numbers fell to between 0.33% and 0.17% (residual trap catch) from a pre-operation level of 3%.

The Catlins mōhua population, estimated to be several thousand, is one of the largest remaining in the South Island.  Survey results for 2013 show an increase in the average number of mōhua and groups of birds from 2012 and previous highs in 2004 and 2008.  Record numbers of bellbird and tomtit were also observed.

DOC last used aerial 1080 to target rats and stoats in the Catlins after a big beech mast (seeding) event in 2009.

Rodent levels will be monitored closely with the predicted large beech mast this autumn to determine whether a pest control response is needed later this year as part of DOC’s Battle for our Birds programme.