Aerial pest control to protect New Zealand’s rare native bats and other species is completed in the Eglinton valley in Fiordland National Park.

The Battle for our Birds aerial 1080 pest control over 10,300 hectares complements a grid of poison bait stations for rats and possums in the lower valley, where a trapping network also keeps stoats down.

The operation will protect New Zealand’s most important mainland southern short-tailed bat population, as well as southern long-tailed bats, and birds such as mōhua/yellowhead and South Island kākā. 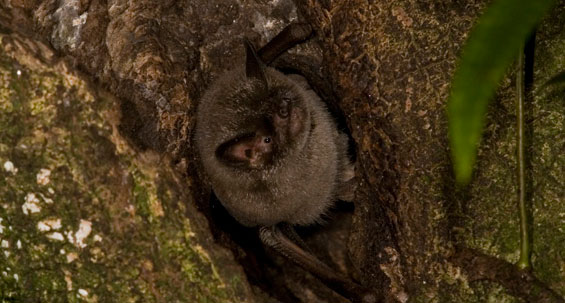 It will also protect rare native mistletoe species and tree fushia from being eaten by possums.

DOC Fiordland Conservation Services Manager Lindsay Wilson said the poison bait stations had successfully reduced rats to very low levels over 4800 hectares in the lower, more accessible parts of the valley but numbers continued to climb outside this area.

“In the higher steeper areas beech seed has caused rat numbers to rise to damaging levels.”

“This is a nationally important area for bats and mōhua and we need to use all the tools we have available to knock down the rat plague and keep on top of pests.”

The application of biodegradable 1080-laced cereal baits over the treatment area followed its application with non-toxic “pre-feed” bait two weeks ago.

The operation followed stringent safety procedures and buffer zones were in place over the grassed valley flats, along the Milford Road, around campsites, public amenity areas and significant waterways.

Warning signs advising the public about the risks of the pesticide and poisoned carcasses are in place at entrance points to the treatment area.