A study of whio/blue duck in eastern Kahurangi National Park has shown the benefits of rearing ducklings in wildlife facilities. The study has also shown that aerial 1080 pest control has helped to increase whio numbers in the wild.

A study of whio/blue duck in eastern Kahurangi National Park has shown the benefits rearing ducklings in wildlife facilities and aerial 1080 pest control have in increasing their numbers in the wild.

The Department of Conservation study in the Wangapeka-Fyfe Whio Security Site found female whio hatched and reared at a wildlife centre contributed significantly to productivity in the site after being released there as juveniles.

The three-year study also found landscape-scale aerial 1080 pest control provided better protection for whio nests than the site's intensive trapping along 73km of waterway. Twenty five whio are believed to have fledged in the breeding season immediately after an aerial 1080 pest control operation compared to none and then three in the following two years with trapping alone.

The whio security site, centred on the Wangapeka and Fyfe river catchments, is one of eight nationally ensuring the survival of whio in the wild through DOC's partnership with Genesis Energy in the Whio Forever Project. 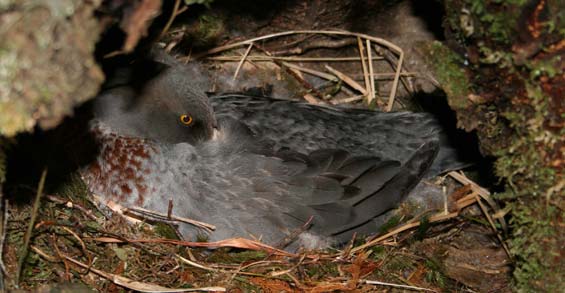 A female whio on a nest

"Through the WHIONE – Whio Operation Nest Egg – programme we have been taking eggs from wild pairs in the park to Christchurch's Peacock Springs Wildlife Centre. The ducklings are hatched and raised there until three to four months old when they are then released into the Wangapeka-Fyfe Whio Security Site.

"Fifty percent of the 28 whio believed to have successfully fledged from nests over the 2011-2014 study period were produced by WHIONE females though they numbered just eight or 38 percent of the 21 females followed. 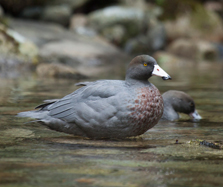 "The study also showed that in the few months after an aerial 1080 pest control operation by the then Animal Health Board (now TBFree NZ), nine out of 10 nests, 90%, successfully produced ducklings. Flooding caused one nest to fail.

"In the following years with just trapping alone, just three out of 6 nests, 50 percent, and then two out of six nests, 33 percent, successfully produced ducklings.

"Of the nests that failed with trapping alone, one female is thought to have been killed on the nest by an unknown predator and stoats took one clutch of eggs and two eggs from another clutch. Weka predation on nests and flooding also caused nest failures.

Ms Steffens said that a combination of aerial 1080 operations every few years with stoat trapping in the intervening years was needed to protect the whio population. The stoat trapping network will be further intensified next year to provide greater protection for whio in years when aerial 1080 pest control doesn't take place.

DOC is planning aerial 1080 pest control in the Wangapeka-Fyfe area this spring to protect nesting whio and other vulnerable native species from beech mast predator plagues. Whio survival and productivity will be monitored as part of this operation.

This is part of a larger DOC Battle for our Birds pest control programme in Kahurangi National Park in response to an exceptionally heavy beech seedfall – mast – that is fuelling rapid rises in rat numbers and subsequently stoat numbers.

Since 2003, 60 WHIONE-reared juveniles have been released into the Wangapeka-Fyfe Whio Security Site. The goal is to establish 50 pairs in the site which currently has around 30 pairs.

Genesis Energy and DOC have partnered together in a five year programme to secure the future of this unique threatened native bird. Operating under the name of Whio Forever this partnership is fast tracking implementation of the national Whio Recovery Plan to protect whio and increase public awareness.

A background on the Whio Forever partnership:

Why whio need our help: