The final of two aerial bait applications required to remove rats and feral cats from Ahuahu/ Great Mercury Island have been safely and successfully completed.

The final of two aerial bait applications required to remove rats and feral cats from Ahuahu/ Great Mercury Island have been safely and successfully completed.

The Department of Conservation (DOC) and the owners of Great Mercury Island, Sir Michael Fay and David Richwhite are working together to eradicate pests from Great Mercury to make the island a pest free sanctuary for native wildlife.

The partnership to eradicate pests from Great Mercury was formed to reduce the threat of rats on Great Mercury spreading to the six neighbouring islands in the Mercury Group that are all pest free Nature Reserves. 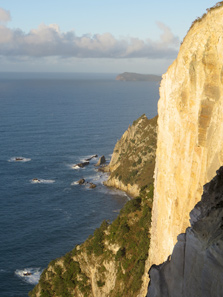 Afternoon glow from Pari-Nui-Te-Ra, the white cliffs of Ahuahu-Great Mercury Island, the great beacon that guided all the waka to Aotearoa from Te Moana-Nui-O-Kiwa (the Pacific Ocean)

Removing the rats and feral cats from Great Mercury will also benefit the island's ecosystems and create a pest free sanctuary for threatened native wildlife that can be developed as a show case for conservation that the public can enjoy. The public have been welcomed to come ashore on the island since 1977.

Resident populations of native birds including kaka, kakariki and little blue penguins, native lizards, 50 species of native land snail, threatened native plants and nesting seabirds of international significance - such as Pycroft's petrel - will all benefit from removing the pests on Great Mercury.

Removing the rats and feral cats from the island involved precisely targeted aerial applications of bait using specially designed buckets carried by helicopter. The helicopter pilots use satellite navigation (GPS) technology to ensure the bait is spread only where intended.

This year marks 50 years since the first New Zealand island was made pest free. Ruapuke/ Maria Island, in the Noises Island Group north of Rangitoto, was declared pest free in 1964 after the successful removal of Norway rats.

DOC has used aerial applications of bait to safely and successfully remove pests from more than 60 islands throughout New Zealand. These include Hauturu, Tiritiri Matangi, Motuihe, Rangitoto and Motutapu in the Hauraki Gulf.

Closer to Coromandel Ohinau and Cuvier islands and four of the Mercury Islands have been cleared of pests. Now Great Mercury is on its way to becoming officially pest free.

Joe Davis, of Ngāti Hei, says successfully completing the aerial bait applications on Ahuahu/Great Mercury is great news. "It marks a major step towards making the island a pest free sanctuary for our native wildlife."

Joe says Ahuahu /Great Mercury Island is a significant place for Maori throughout New Zealand. "Our oral history tells of Ahuahu as the place where all the great voyaging waka, carrying the first people to settle in New Zealand, made their first landing in Aotearoa."

"Ahuahu is important both spiritually and culturally in terms of whakapapa and spiritual belonging. Oral history also records Ahuahu as a place where Kupe taught the captains of the waka how to sail between Aotearoa and the islands of the Pacific."

"We welcome making Ahuahu pest free, enabling the native wildlife to thrive. It's a vital step towards reviving the mauri of the island," says Joe Davis.

From now on everyone travelling by boat to the Great Mercury needs to make sure they're not carrying any stowaway rats, mice or cats.

"The message is simple. Check your boats and gear for stowaway pests, tell everyone Ahuahu / Great Mercury Island has been cleared of pests and we need to keep it that way," says Pete Corson.