The Government is to provide a $744,000 Community Conservation Partnership Fund grant to the Kiwis for kiwi™ to support 80 community-led kiwi recovery programmes around New Zealand.

Date:  07 August 2014 Source:  Office of the Minister of Conservation 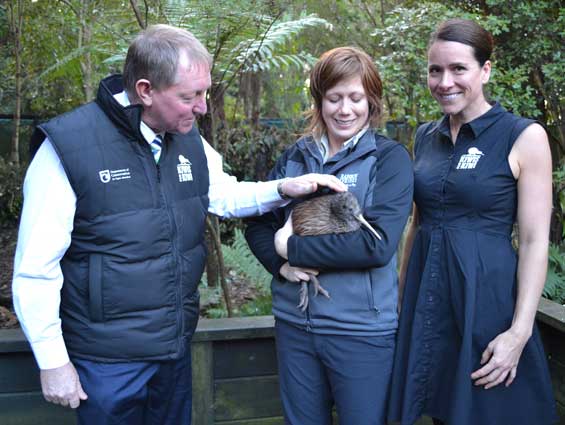 “Kiwis once numbered in their millions but with predators and the loss of habitat now number 70,000. They will not exist for our grandchildren outside of sanctuaries if we do not step up our protection,” Dr Smith says.

“The biggest problem is that 95 per cent of young kiwi do not survive to breeding age in unmanaged areas because of stoats, rats and possums. This grant is about the Government partnering with the community and the Bank of New Zealand to halt the historic decline in Kiwi numbers.

“Kiwis for kiwi has been going for a decade but need more support to help kiwi conservation projects around the country. This grant will over the next three years enable the national organisation to employ a mentor for advocacy and for working with iwi. It will also enable the employment of a Northland regional kiwi co-ordinator where there is the most potential to maintain viable populations of kiwi in the wild.

“Saving the kiwi is going to require that we empower communities all over New Zealand. This grant will help with work like kiwi avoidance training for dogs, training volunteers for kiwi call count monitoring, supporting trapping and predator control operations, and helping communities understand the vulnerability of their local kiwi populations.”

The Community Conservation Partnership Fund was announced in March this year and provides $26 million over the next four years to community organisations undertaking natural heritage and recreation projects. The Fund will support hundreds of projects on public and private land and is particularly focused on supporting the conservation of special native species and wildlife like kiwi.

“Saving the kiwi is a massive long-term undertaking that is going to require a huge effort by DOC, business and communities. The partnership with the Bank of New Zealand on kiwi protection is one of DOC’s longest and most successful partnerships. This grant is about extending this work with kiwi further into New Zealand communities,” Dr Smith concluded.