The Government is to provide $300,000 of funding to two community groups to support their work in protecting some of New Zealand’s special seabird species, Conservation Minister Dr Nick Smith announced today from the Otago Peninsula.

Date:  16 July 2014 Source:  Office of the Minister of Conservation

The Government is to provide $300,000 of funding to two community groups to support their work in protecting some of New Zealand’s special seabird species, Conservation Minister Dr Nick Smith announced today from the Otago Peninsula.

“New Zealand is the seabird capital of the world with 100 different species, more than any other country. Pests and accidental fishing fatalities are the greatest threats with some species like black petrels down to only 1500 breeding pairs, which makes them rarer than the kiwi. These grants are about stepping up our conservation efforts and partnering with community organisations and industry to better protect our seabirds,” Dr Smith says.

The Southern Seabird Solutions Trust will receive a grant of $100,000 over the next two years which will go towards ‘Seabird Safe,’ a campaign that aims to reduce the number of birds accidentally caught by recreational fisherman in the upper North Island each year.

“Seabird Safe’ will involve a series of workshops that will inform fishermen on how to avoid catching the native seabirds, and how to handle and release them safely when they do. The Trust will also use the grant today to build a network for ‘seabird smart’ fishing sponsors.”

The Yellow-eyed Penguin Trust will receive a grant of $200,000 over the next two years to help the Trust to develop a plan to boost the number of yellow-eyed penguins, as well as support its advocacy work for the species. 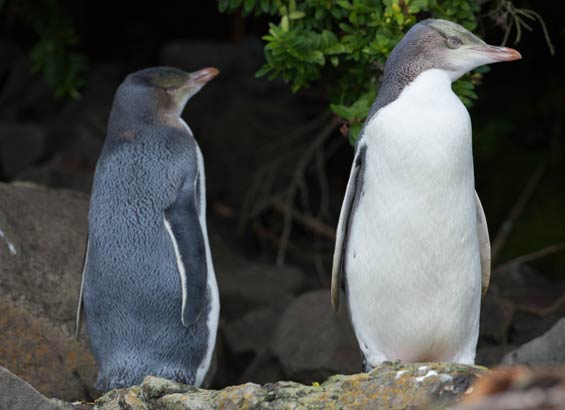 “Yellow-eyed penguins are endemic to New Zealand, and the Trust has been at the forefront of efforts to protect these species since the Trust was established in 1987. I commend in particular the Trust’s community-initiated approach to wildlife conservation, which has been copied and adapted to numerous other environmental contexts throughout New Zealand. The Trust continues to set a benchmark for community-led conservation of threatened species in New Zealand.”

Today’s funding announcements were made at this morning’s launch of ‘Sharing Worlds, Seabirds and Fishing,’ a short film produced through a joint project between the Southern Seabird Solutions Trust, the Yellow-eyed Penguin Trust, Otago fishing groups and other community organisations.

“The film showcases conservation and fishing interests working together for the benefit of seabirds like the yellow-eyed penguin. It demonstrates the value of differing interests willing to understand each other’s perspectives and find common ground to effectively address the plight of these incredible species.”

The Community Conservation Partnership Fund was announced in March this year and provides $26 million over the next four years to community organisations undertaking natural heritage and recreation projects. The Fund will support hundreds of projects and is particularly focused on helping the survival of the large number of New Zealand’s threatened species, including seabirds.

“I congratulate the Southern Seabird Solutions Trust and the Yellow-eyed Penguin Trust on their grants and look forward to seeing the positive outcomes they will deliver for New Zealand’s special birdlife. This type of collaborative approach reflects the spirit of the Community Conservation Partnership Fund, which seeks to encourage greater community involvement in conservation.”