The long weekend had a sad beginning for Whakatane Kiwi Project staff and volunteers, after receiving a report that a kiwi had been killed by a car a short distance from the Ohiwa Oyster Farm.

The long weekend had a sad beginning for Whakatane Kiwi Project staff and volunteers, after receiving a report that a kiwi had been killed by a car a short distance from the Ohiwa Oyster Farm. 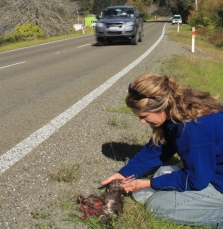 John Black, Whakatane Kiwi Trust Biodiversity Fieldworker and Bridget Palmer, Department of Conservation Community Relations/ Biodiversity Ranger, arrived at the scene with plastic bags in hand to pick up another kiwi that had been killed. Kiwi that venture away from the core protection area surrounding Ohope, Kohi Point and Mokorua Scenic Reserves are immediately at risk. In the previous twelve months, six monitored kiwi have died outside the core area; two killed by dogs, two following vehicle incidents and two predated by stoats.

“We know that there are kiwi breeding outside the project areas, but  we hope that our continued education, advocacy and community support will help keep these kiwi safe from risks like cats, dogs, possum traps and of course cars”, said Mrs Palmer.

“This is the reality of having such a successful kiwi population so close to an urban area; we are the ‘Kiwi Capital of the World’ after all”, she said.

Margaret and Stuart Slade, founders of the Nukuhou Salt Marsh Care Group, are more than familiar with the sight of our precious native birds squashed on Wainui road between Ohope and State Highway 2. They were easily able to identify the kiwi while biking to Ohope early on Saturday morning.

Mr and Mrs Slade have recently picked up two dead Matuku/Australasian Bittern and numerous other birds which have succumbed to the same fate as the kiwi, near the Nukuhou Salt Marsh in Cheddar Valley.

Matuku were once an abundant wetland bird, but now their numbers are less than 1000 worldwide. New Zealand is the stronghold for this species and it is through the tireless work of volunteers that we are lucky to encounter them in the Whakatane area.

“We have an amazing network of community groups within the Whakatane area that ensure the protection of our native wildlife. To help support these projects we need to be vigilant and take a second glance while driving along our local roads”, said Mrs Palmer