The Department of Conservation is excited to see a white-fronted tern colony of 100 pairs nesting on the remains of the historic Tokomaru Bay Wharf.

The Department of Conservation (DOC) is excited to see a white-fronted tern colony of 100 pairs nesting on the remains of the historic Tokomaru Bay Wharf.

“It is rare to see a colony of white-fronted tern on the East Coast, so DOC wants to ensure their protection,” says Conservation Partnership Manager, Awhina White.

“It's great to see most of the birds are safe from predators, people, and dogs—nesting in the hardwood beams of the original wharf,” says Ms White. “However, there are 20 pairs nesting on beams that are more vulnerable to interference.

“As they often make their nests close to places people use, we are asking that they be left alone.”

‘Do not disturb’ signs have been erected at the site and DOC staff will be checking on the birds.

White-fronted tern take 50 days to fledge their young once hatched and it appears that the birds will be present on the wharf through to mid January next year.

White-fronted terns are native sea birds measuring 42 cm in length weighing 160 gm. Pair bonds are retained from one season to the next and they start breeding at two years of age and live about 18 years. The New Zealand population has declined markedly over the last 40 years and is currently regarded as threatened. 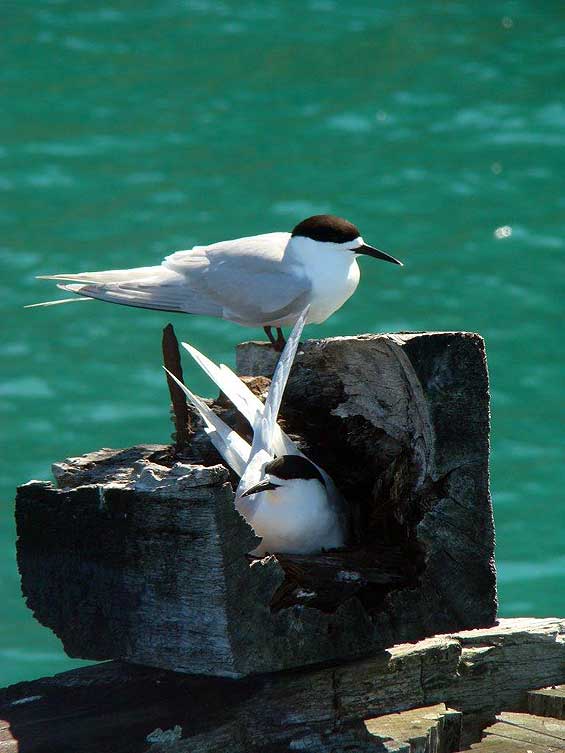