Cook Strait will be a hub of whale watching activity over the next month as Department of Conservation researchers, former whalers and many other volunteers carry out a tenth annual whale survey.

Cook Strait will be a hub of whale watching activity over the next month as Department of Conservation researchers, former whalers and many other volunteers carry out a tenth annual whale survey.

A record 106 humpback whales were counted in last year’s four-week survey with a second highest tally of 73 humpbacks the year before. It is hoped an upwards trend in humpback numbers will again be observed this year.  Last year’s survey also recorded the highest number of humpback whales seen in one day – 21 spotted on June 22.

This year’s Cook Strait Whale Survey, a DOC partnership with OMV New Zealand Limited, runs from this Saturday, June 8, to Saturday July 6. The annual survey has been carried out since 2004 to assess humpback whale recovery since commercial whaling ended in New Zealand in 1964. It is timed for humpbacks’ northern migration from Antarctic waters to South Pacific breeding grounds. 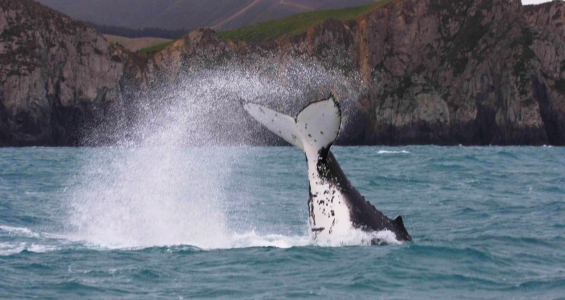 A humpback whale slaps its tail

Seven former whalers have been part of the survey team from the outset, keenly putting their whale spotting skills and experience to use for the research which helps to protect whales in our waters. Competition is fierce among the old hands to score the highest number of whale sightings from a lookout on Arapawa Island in the Marlborough Sounds.

Wellington marine ecologist Nadine Bott, who leads the survey, said it was too soon to tell if the higher numbers of humpbacks recorded in the last two surveys indicated humpback numbers were recovering.

‘The higher numbers seen in the past two years could be a sign humpback numbers are improving or it could just be an anomaly. We hope they are increasing but it appears that different animals are moving through each year so it may just be variable each year.

‘Factors in the number of whales seen include having enough clear weather to see whales and the survey catching the peak of the humpback migration which some years is earlier or later.

‘This year’s survey may help indicate to what extent humpback numbers may be increasing but ideally we need at least a further two year’s of research for it to be clearer.

‘The information obtained through the research assists efforts to protect humpback whales in the South Pacific and Southern Ocean and I am very grateful to OMV New Zealand for working in partnership with us on this valuable research.’

Information to identify individual whales is gathered in approaching whales by boat to endeavour to take photographs and get skin samples using a biopsy dart tool. These can be checked against photographs and genetic samples from whales across the South Pacific to see if any match.

OMV New Zealand Limited also supports school students learning about whales and the research project through the web-based educational LEARNZ programme. The LEARNZ Wandering Whales programme is featuring on the LEARNZ website this month for the fourth year running and includes a field trip with the survey team from 17 to 21 June.

Support for the whale survey also comes from Transact Management Ltd which provides logistical assistance, the Bell Tea & Coffee Company which supplies tea and coffee to sustain the whale watchers in the winter cold and the University of Auckland which provides genetic analysis support.

The highest number of humpback whales spotted in one day prior to last year’s record 21 was 12 seen in one day in 2004, the first year of the survey.