When Helen Jonas, DOC team leader for the shore plover recovery on the island visited late last year, it was discovered the island population had been reduced to a quarter of what it was, now 20 birds remain. The total world population has been reduced to about 200 birds. “This has a huge impact on the viability of the species” said Ms Jonas, as Waikawa was considered to be a safe and stable population.

The privately owned island has been a safe sanctuary to the shore plover for the past thirteen years. The numbers had built up to a point where the population was contributing eggs to other predator free islands. This season’s planned egg translocation turned into a rescue attempt. 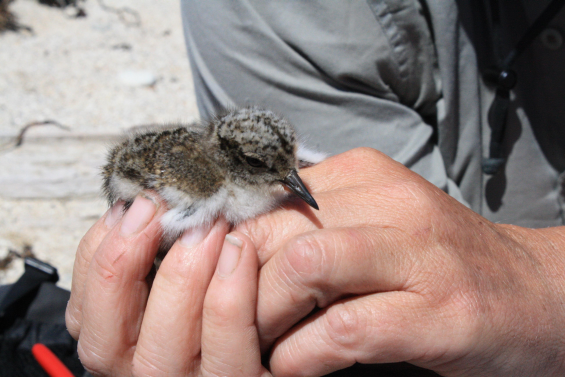 We didn’t know what the issue was and unfortunately we still don’t know Ms Jonas said. It could have been disease, predation by gulls or hawks, mustelid, rat, cat or even a dog that’s come over with a visitor to the island. As a precaution 12 Shore plover eggs were removed from the island and taken to Mount Bruce Pukaha in Wairarapa and Isaac’s Wildlife Centre in Christchurch for incubation. The juveniles are planned to be released on Mana Island next month.

“We are throwing everything we possibly can at the island to ensure this does not happen again” she said. We’ve undertaken disease screening, and have sent dead birds over for autopsy and DNA testing. We have had specialised stoat tracking and rat tracking dogs and have put cameras in place. Nothing has turned up so far.

The remaining birds on Waikawa, including the sole fledged chick from this season, are now being protected by more regular pest monitoring and control efforts by Onenui Station owners. It is hoped that the island will be safe for shore plover again soon Ms Jonas said.

The remaining shore plover on the island appear stable and are still nesting and successfully producing chicks. Visitors to the island are reminded to check their loads to ensure they haven’t got any unwanted travelers with them.