Several kiwi were released in the Tongariro district last week to breed and boost the local populations, and is timely for this week’s ‘Save Kiwi Week’ campaign. 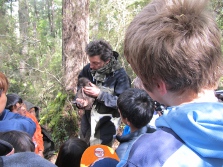 Several kiwi were released in the Tongariro district last week to breed and boost the local populations, and is timely for this week’s ‘Save Kiwi Week’ campaign which is raising awareness and funds to help keep kiwi alive.

A male kiwi named Tuma and his daughter Matamua were released in the Karioi Rāhui in the Rangataua Forest on the southern side of Mount Ruapehu. The captive reared kiwi arrived on a plane all the way from Peacock Springs / Isaacs Wildlife Trust in Christchurch. Tuma lost his mate last year, and will find a new mate in his new forest protected by 700 DOC 200 predator traps

Seventy kiwi have been reintroduced to the area over the years since 1999 through a joint partnership between the Department of Conservation and Ngāti Rangi.

Attending the kiwi release were 30 children from the Kahui Snow Academy of Ngāti Rangi and Ngāti Uenuku descent. 11 year old Emanuelle Taurahaira found the experience "Fascinating!" Kuia Nga Pani Te Hate thought it was a cheerful outing for the tamariki. 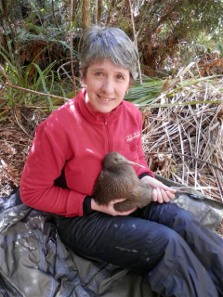 Two captive reared female kiwi from the Otorohanga Kiwi House were also released in to the west of the Tongariro Forest. Locals from the Owhango Residents and Ratepayers Society Inc attended, and got to name the kiwi. Local bee keeper David Partis named one ‘Honey’. Karen Erni named the other kiwi ‘Elise’, after her husband’s grandmother who was the first Erni lady to immigrate to New Zealand from Switzerland in October 1903. Hopefully the girls will find mates soon within the Tongariro Kiwi Sanctuary which has a population of around 200 birds.

Currently a Kiwis for kiwi fundraising auction is running on Trade Me for naming rights for a kiwi to be released in the Tongariro Forest.

For more information visit the Kiwis for kiwi website