Anglers and trampers may encounter whio chicks over the next few months in our back country rivers, enjoy them, but learn how to take care in their presence.

As we get into spring anglers and trampers on some of our back country rivers in Tongariro Forest and the Kaimanawa ranges are likely to encounter chicks from the latest whio (blue duck) breeding season, which is well underway now. Whio nest for just over a month with most ducklings appearing in October and November, though some may hatch up until Christmas.

Every year DOC staff hear accounts of ducklings being separated from their parents, and we want to let people know the best thing to do is to leave the young birds where they are, rather than be tempted to ‘rescue them’. Ducklings will most likely be reunited with their parents when you leave. 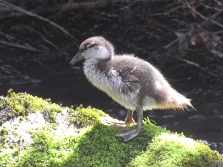 If the ducklings are on the water, be very careful not to push them downriver, as this can cause the whio ducklings to get separated from their parents. This can easily happen by simply walking down the river and have them swimming off ahead of you. Instead move away from the water’s edge and make your way past the birds with as little disturbance as possible.

For the same reason be sure to keep dogs under control, as they can disturb the family groups and cause ducklings to get separated, which is often fatal to the young birds. Whio ducklings are distinctive to look at, as in their earlier stages (first month) the ducklings are green coloured on their backs and a noticeable tan colouring around the rear end. The underbellies of the ducklings are white and they also have a dark stripe from bill to the back of the head.

They are not striped like paradise shelduck chicks, and don’t have the yellow colouring typical of grey or mallard chicks. But even if you think you are sure of the species, as a general rule try not to disturb any ducklings you encounter out on our rivers.

Last year we had exceptional results with whio in Tongariro Forest rivers, as over 200 whio ducklings were hatched on the Whanganui, Whakapapa and their tributaries. This is thanks to extensive pest control along the various rivers in the forest, with a combination of trap boxes and 1080 operations helping to keep the predator population under control.

Local populations on the Tongariro River also appear to be growing, with whio now a common sight for walkers and anglers, which is great news for such a rare and threatened species.