Takahē chicks hatch on Motutapu Island, a huge step in saving the species

The first takahē chicks have been hatched on pest free Motutapu Island, near downtown Auckland, marking a major milestone in securing the survival of this critically endangered native bird.

The first takahē chicks have been hatched on pest free Motutapu Island, near downtown Auckland, marking a major milestone in securing the survival of this critically endangered native bird.

"There are only 260 takahē in the world. Hatching our first chicks on Motutapu is a huge event in the work to save takahē," says Deidre Vercoe Scott, manager of the Department of Conservation (DOC) Takahē Recovery Group.

"Motutapu is a key site for the Takahē Recovery Programme. It's a pest free island with a suitable habitat that's large enough to accommodate up to 20 breeding pair of takahē. This would be the largest population of takahē outside the Murchison Mountains in Fiordland."

"We've eagerly anticipated the arrival of the first takahē chick on the island, so to have two chicks hatched in one go is very exciting. It marks the start of Motutapu as an important breeding site for takahē. 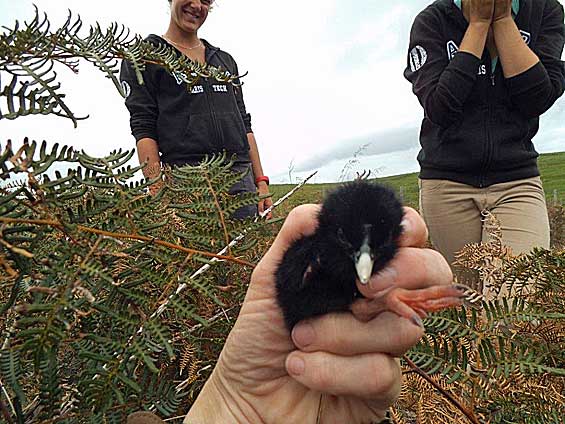 One of the takahē chicks hatched on Motutapu Island

"The other pest free islands that are home to takahē - Kapiti, Mana, Maud and Tiritiri Matangi - are running out of room for these birds. So Motutapu is crucial in enabling the takahē population to grow," says Deidre Vercoe Scott.

The parents of the two chicks hatched on Motutapu are named Bradshaw and Charlie. Both were hatched at the Burwood Bush Takahē Rearing Unit, near Te Anau, and moved to Motutapu in November last year along with seven other adult takahē.

"We're thrilled Bradshaw and Charlie paired up on Motutapu and have become the first takahē to hatch chicks on the island," says Deidre Vercoe Scott.

"This is a good sign they'll have more chicks in the future. Once takahē pair up, they tend to stay together, if they're breeding successfully. Takahē produce one to three eggs a year. Both parents incubate the eggs and feed the chicks until they're three months old. At this age the chicks can feed themselves but they remain dependent on their parents until they're a year old."

The arrival of the chicks on Motutapu coincides with the 65th anniversary of the re-discovery of takahē. They were thought to be extinct for around fifty years, due to introduced predators and loss of habitat. They were rediscovered on November 20, 1948, by Dr Geoffrey Orbell, in the Murchison Mountains deep in the Fiordland National Park.

Mitre 10, DOC's partners in the Takahē Recovery Programme, are celebrating the anniversary with a nationwide competition.

Mitre 10 General Manager Marketing Dave Elliott: "It's fantastic two takahē chicks have hatched on Motutapu during our month long celebration of the 65th anniversary of the rediscovery of this unique bird. Building a self-sustaining population of takahē on Motutapu is a key part of the programme to secure the species survival. It's fantastic this milestone has occurred almost exactly 65 years after takahē were rediscovered. We're very proud to be working with DOC to help ensure takahē remain part of the New Zealand landscape."

Mitre 10 and DOC have been working together to save takahē since 2005. Mitre 10 has provided more than half a million dollars for takahē conservation work including assisting with the development of takahē sites to enable the population to grow.

With takahē classified as critically endangered, one step away from extinction, secure predator free sites, such as Motutapu, are crucial to the Takahē Recovery Programme as they safeguard the population and help maintain genetic diversity within the species. Motutapu is an ideal site for takahē. It's stoat free and the island's wetlands, grasslands and native forest - planted by Motutapu Restoration Volunteers - provide a great habitat for takahē.

Motutapu Restoration Trust volunteers have established a nursery and planted nearly half a million native trees on the island. This has provided a home for threatened native birds released on Motutapu since it and neighbouring Rangitoto were declared pest free. The Trust is also working to ensure the grassland habitat meets the needs of takahē.

"Hatching takahē on Motutapu starts a wonderful new chapter in the restoration of the island. It's reward for the volunteers who've planted the native forest, and keep the weeds at bay. They've created a place where threatened native wildlife such as takahē, Coromandel brown kiwi and tīeke can thrive," says Motutapu Restoration Trust chair Christine Fletcher.

Mitre 10 has been working in partnership with DOC to save takahē since 2005, providing more than half a million dollars for this work to date. The partnership has allowed DOC to

To celebrate 65 years since takahē were rediscovered, Mitre 10 are running an online competition. The winner and three friends or family members will travel to the Murchison Mountains where takahē were rediscovered. The prize includes return airfares to Queenstown, four nights accommodation in Te Anau, car hire, a Te Anau glow worm cave cruise and a screening of Ata Whenua, a 32 minute film showing the Fordland World Heritage area. The winning group will also fly by helicopter with DOC rangers into the Murchison Mountains.