The first annual prize draw for tahr hunters who send in their hunting diaries to DOC has been won by Hokitika man Aaron Lourie and by Rex Mitchelle of Rangiora.

The first annual prize draw for tahr hunters who send in their hunting diaries to DOC has been won by Hokitika man Aaron Lourie and by Rex Mitchelle of Rangiora.

The Hooker-Landsborough and Adams Wilderness tahr ballot finished on 28 June. Each year, hunting parties are asked to return their hunting diary to DOC’s Haast office so that a clear picture can be gained of the impact the ballot process is having on tahr numbers.

To encourage hunters to return their diaries, a prize draw was organised this year for every ground based hunting party that sent in their returns. 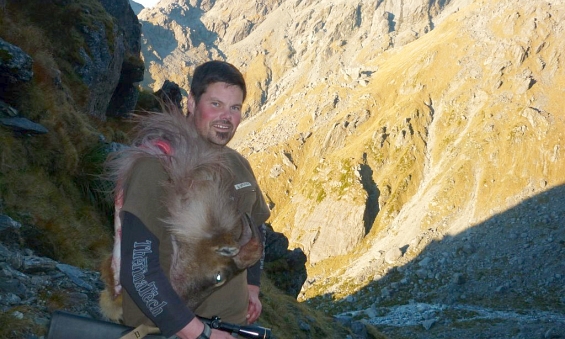 Aaron Lourie with a bull tahr in Adams Wilderness Area

The Swazi prize winner Aaron says, “We had a fantastic trip. We had three days of good weather but the last day was rough with snow and wind. Both my friend and I shot our first bull tahr. It was our only trip this winter so we were really happy. I’m looking forward to the next year.”

The Macpac prize winner, Rex, says, “We got in two days late and came out three days early because of the weather but still had a good time even though it was really cold. We didn’t see as many animals as the previous year. The weather did limit the time out hunting. I shot one old bull tahr.”

DOC’s Haast visitor centre programme manager, Carl Baker says, “The prize draw incentive was a trial to increase the number of hunting diaries returned, so it’s been good to see the number of hunting diaries returned is has increased compared to last year. We’ll run the prize draw next year again, so everyone who thinks they are due a bit of flash new gear should make sure they get their diary in to DOC!”.