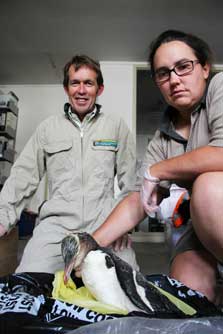 With a population of about 450 breeding pairs on the Otago coast, and 181 breeding pairs on Otago Peninsula and surrounds, these deaths will have a devastating effect on this endangered bird and it will take some breeding sites many years to recover, David Agnew said.

The dead adult penguins, as well as several juveniles and chicks, were found at 13 of the 15 breeding sites on the peninsula during routine end-of-season chick monitoring in the past three weeks. Further discoveries by members of the public prompted extra searches at the sites to ensure as many dead penguins were collected as possible and sent to the Wildbase team at Massey University for post mortem.

The post mortem results have been inconclusive, with all birds being in good condition which rules out food shortages. The deaths may have been caused by a marine biotoxin (accumulated through the food chain) but this cannot be confirmed until toxicology test results are received from the Cawthron Institute.

Mel Young said the deaths are strikingly similar to an event in 1990 when 150 breeding yellow-eyed penguin adults were found dead. It is assumed this was also caused by a marine biotoxin but this was never confirmed.

Yellow-eyed Penguin Trust (YEPT) chairwoman Lala Frazer said the trust is extremely worried about the penguin deaths as the population has only just recovered now to being back to a viable population from that 1990 episode.

“It’s hard to understand when all the adults sent to Massey for post mortem have been in good body condition, with no signs of trauma or infection. Most adults recovered have been actively breeding this season and we found 181 nests on the peninsula. The season started off looking great, and chicks were the biggest I have ever seen at pre-fledge,” Mel said. 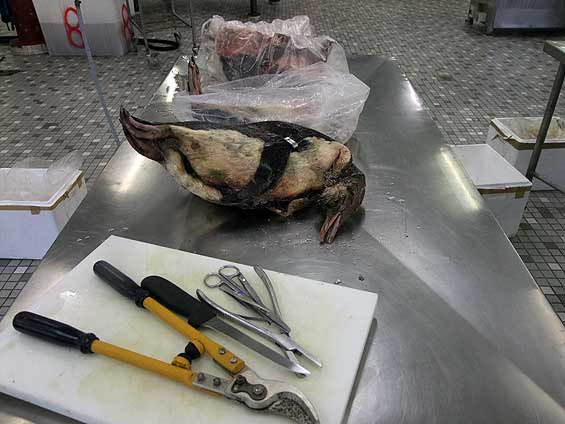 Another blow is that the deaths have left many chicks without parents to feed them. Some of the chicks we checked had lost up to 1.5kg in weight and have had to be taken into captivity to received supplementary feeding before they fledge. Fortunately, most of the birds recovered have been banded, which has allowed DOC and other monitoring parties to check the nests where known birds had chicks.

Feeding the 30 orphaned chicks, three adults and three juveniles found so far has become an almost full-time job for rehabilitation centre staff at Penguin Place, although a generous fish donation from a Bluff fishing company has kept costs down. 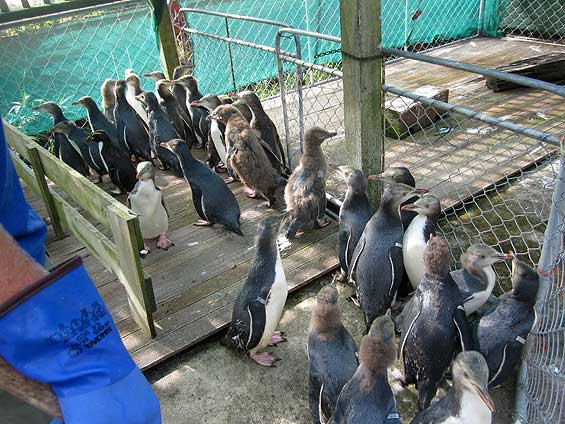 The crisis has stretched the resources of the commercial operator on the peninsula which works alongside DOC to care for all species of sick and injured penguins. The penguins will be cared for at the centre until they are a healthy weight and are ready to fledge, and it is considered safe to release them back into the wild.

Penguin Place, tour operators and volunteers are taking the lead in this event, with DOC and the YEPT providing on-the-ground support at key sites and DOC co-ordinating technical support. DOC staff have been busy co-ordinating the response to the event to ensure that all available information is obtained to enable the cause to be identified and the impact on the penguins minimised. They have been working closely with the YEPT, Penguin Place, Massey University, iwi, landowners, tour operators and the many volunteers who have been assisting.

DOC is developing contingency plans for managing the situation if the deaths continue, but staff are hoping the crisis has passed with the return of cooler weather.

In the meantime, Mel Young is co-ordinating the effort to ensure the coastline is being searched for any further dead birds, chicks are being monitored to ensure they are not starving, and any relevant data is being gathered to understand the cause of these deaths. Members of the public are being encouraged to report observations of any dead or distressed penguins to DOC.

Currently 56 yellow-eyed penguin/hoiho have died from the mystery illness. Toxicology results (of three birds) from the Cawthorn Institute have come back negative for all toxins tested. This result, however, remains inconclusive.

Further virology testing is being carried out by MPI, but there is no evidence from gross pathology to support the deaths being caused by avian malaria or other infectious disease. Marine scientists took water and phytoplankton samples this week and Massey University recommends widening the testing for other biotoxins, but this is expensive and frustrating.