Department of Conservation staff on Codfish Island/Whenua Hou report regular sightings of the birds following the second-only transfer by DOC from the subantarctic Snares Islands recently. According to manager of outlying islands, Pete McClelland, this bodes well for establishing a new breeding population.

“The birds are settling in well and should be ready to breed next spring and summer,“ he said “We’re excited about the prospect of this new population improving the chances of survival for the species.” 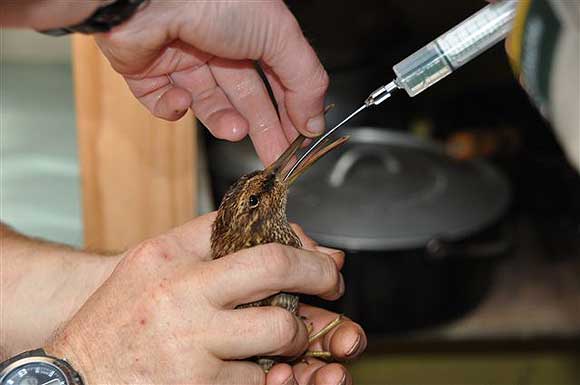 Snipe being fed glucose solution to avoid dehydration on the trip

The snipe, also known as tutukiwi for its long beak and ground living habit, was once widespread around New Zealand but was wiped out on the mainland and many islands by predators, mainly rats.

A total of thirty snipe were captured in hand-nets on the Snares Islands and transferred by boat to Codfish Island. The transfer was funded by Tokyo Channel Six who had a film crew making a programme about penguin behaviour around the Snares.

“This is great example of the Department and commercial enterprise working together,” says Mr McClelland. “The film crew get their wildlife programme and we get to do our important work with species under threat. They were enthralled by what we were doing. They even took time out from their project to film ours!”

The previously transferred snipe, taken from the Snares to Putauhinu Island off the south-west coast of Stewart Island in 2005, have grown to an estimated population of over 500 birds.

It is hoped that these newly established populations brought from the subantarctic islands will ensure the survival and genetic diversity of the species.

The transferred snipe on Codfish Island/Whenua Hou will continue to be monitored, with DOC staff on the look-out for un-banded fledglings next summer.