Slice of Banks Peninsula bought for all to enjoy

A rare fragment of Banks Peninsula has been purchased by the Government and two trusts as a Scenic Reserve, Conservation Minister Dr Nick Smith announced today.

A rare fragment of Banks Peninsula has been purchased by the Government and two trusts as a Scenic Reserve, Conservation Minister Dr Nick Smith announced today.

The 145 hectares of upper slopes (including the summit) and ridge at Saddle Hill, situated six kilometres east of Little River, has been purchased for $660,000 by the Nature Heritage Fund in association with the Rod Donald Banks Peninsula and Josef Langer trusts.

“Being just an hour’s drive from the central city Saddle Hill will be a fantastic escape for Cantabrians and a tourist attraction in its own right,” Dr Smith said.

“Saddle Hill offers breath-taking views in every direction, walking and climbing opportunities and showcases the full range of the peninsula’s native fauna. It also includes one of the peninsula’s best remaining examples of narrow-leaved snow tussock grasslands, as well as remnants of old growth podocarp forest.”

Dr Smith said less than one per cent of Banks Peninsula’s old growth forest remains today primarily as a result of European burning.

Chair of the Rod Donald Banks Peninsula Trust Gary Moore said the purchase with other agencies was a first for the trust and would enable a walkway to be developed.

“It paves the way for a spectacular walkway over the top of Saddle Hill so that ordinary people can get out and enjoy this special place.” 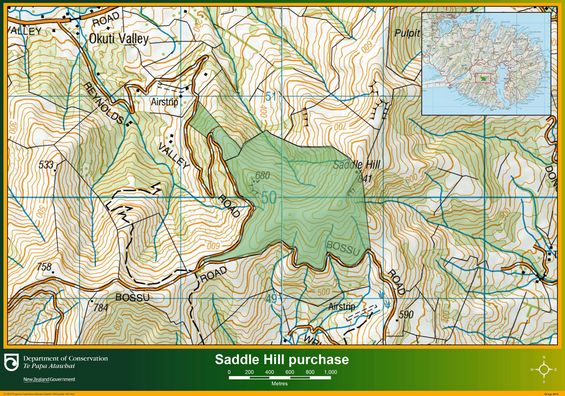 A map of the recently purchased Saddle Hill

Since 1990 the fund has purchased more than 340,000 hectares of natural areas which would have otherwise been cleared, logged or further damaged by the introduction of browsing animals.

The Rod Donald Banks Peninsula Trust was established by Christchurch City Council to encourage the establishment of walkways and camping grounds throughout the peninsula.

The Josef Langer Charitable Trust was established in 2005 to support conservation. One of its focuses is conservation on Banks Peninsula and the Wild Side (south-eastern side) in particular. Josef Langer had a passionate interest in natural history and bequeathed money for the trust.