The Secretary Island deer eradication programme led by the Department of Conservation (DOC) has been ramped up this year, to obtain essential information required for the final stages of returning the island to its natural deer free state.

The Secretary Island deer eradication programme led by the Department of Conservation (DOC) has been ramped up this year, to obtain essential information required for the final stages of returning the island to its natural deer free state.

Since 2006, the deer population has been targeted for eradication, with DOC removing 686 deer. DNA from deer shot on the Island has confirmed that all of the deer were related and the population most likely originated from a small number of immigrants arriving in the 1960's. All of the recently shot animals are very closely related, suggesting that no recent immigration has occurred.

The remnant population is now so low it is hard to detect deer on the Island at all, making it difficult to know exactly how many were left and where to target them on the island. However, unless these last few deer are eradicated, the population will eventually bounce back, undermining the work to date.

To identify how many deer were remaining and plan the final stages of eradication, helicopter supported hunting and monitoring was undertaken in February 2013. 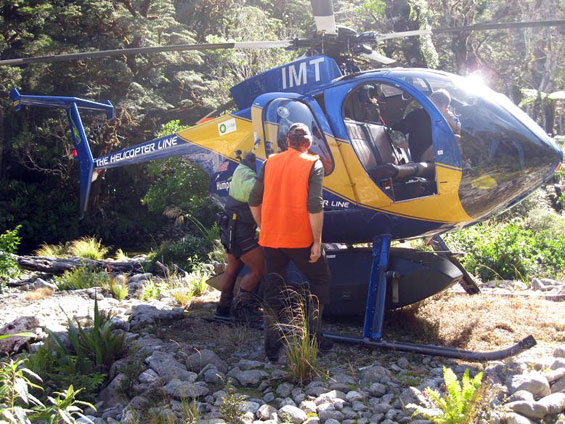 DOC Ranger Norm MacDonald, who oversaw the project, said the method allowed DOC to obtain a snapshot of the current deer population and their locations. "Hunters were positioned by helicopter at ridge tops and made their way down to the coast, before being returned to the next ridge," he said. "The first phase of the project systematically covered all potential deer habitat, taking 24 days for a team of 6 hunters with trained indicator dogs". 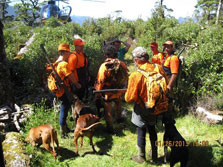 The hunters' primary goal was to map the location of all the remaining deer on the island, with a secondary goal of shooting as many of these deer as possible during the process.

"Once the location and number of deer was known it eliminated a lot of the island that hadn't held any deer for a long time and allowed us to target individual animals or family units effectively", said Mr MacDonald. While the first phase of this project has now been completed, it's not going to be easy to remove these last individuals. "We know there are 16-18 deer left on Secretary Island and where they are located," Mr MacDonald said. "This will enable the final stages of eradication to be targeted and effective".

Deer cause significant damage to our native forest biodiversity. They inhibit the regeneration of many plant species causing irreversible changes to the forest composition, making deer eradication an important part of restoring Secretary Island.

Secretary Island supports a diverse range of plant communities and ideal habitats for our native species. Recent visits show that since the deer eradication programme started in 2006 the understory has been recovering and is now extremely dense. Since pest control began, several native bird species have been translocated onto Secretary, including robins, yellowhead/mohua, kōkako, rock wren and takahē, making this island a very special sanctuary.