An enthusiastic team of Project Tongariro and DOC volunteers placed 150 predator traps throughout Rotopounamu forest in one day.

An enthusiastic team of Project Tongariro and DOC volunteers placed 150 predator traps throughout Rotopounamu forest in one day last weekend.

Increased predator control means that Project Tongariro will be effectively controlling stoats, weasels and ferrets over approximately 1,200 hectares, resulting in an increase in kākāriki, and hopefully kākā. In addition, lower stoat numbers could lead to reintroductions of other species such as weka and brown teal. 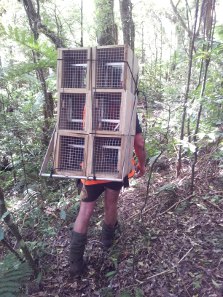 Project Tongariro were pleased with the enthusiastic response from local volunteers. President Paul Green said “The volunteer crew were a team to be reckoned with, one volunteer carried six traps on a metal frame back pack, weighing 36kg, through challenging terrain”.

As well as placing the traps, some of the volunteers will now assist with the checking of the traps regularly over the summer months during the bird-breeding season.

The laying of 150 traps in one day was an impressive logistical feat. The trap lines were cut and marked by a Project Tongariro employee and groups of traps dropped in canopy gaps by helicopter part way along the trap lines to allow shorter trap carrying distances for the volunteers on the ground.

Biodiversity ranger Ian McNickle says, “The early mapping and planning work made the day run like clock work and helped us achieve a large output in one day”.

Project Tongariro and the Department of Conservation have been working together restoring the native bush surrounding Rotopounamu for over 10 years. With a community-focused vision and the enthusiasm of many volunteers, bird numbers have increased significantly.

If you would be interested in checking one of the trap lines through beautiful forest, or by ‘adopting’ a hectare you can become part of the most significant forest restoration project in the Taupō district.

Established in 1984, Project Tongariro is a non-profit organisation that has been active in the region for more than 25 years.

It’s a community group who works in partnership with the Department of Conservation on many projects and whose goal is to promote a wider knowledge and appreciation of the unique natural heritage, historic, educational and recreational values of Tongariro National Park and its environs.