There has been no sign of rodents on Taranga Island, off the Whangarei coastline, since a large-scale eradication took place there in May 2011. Monitoring has just been completed. No rodent sign was recorded, which confirms they have been eradicated.

There has been no sign of rodents on Taranga Island, off the Whangarei coastline, since a large-scale eradication took place there in May 2011.

Monitoring has just been completed now that two years have passed since the aerial application of bait. No rodent sign was recorded, which confirms they have been eradicated. 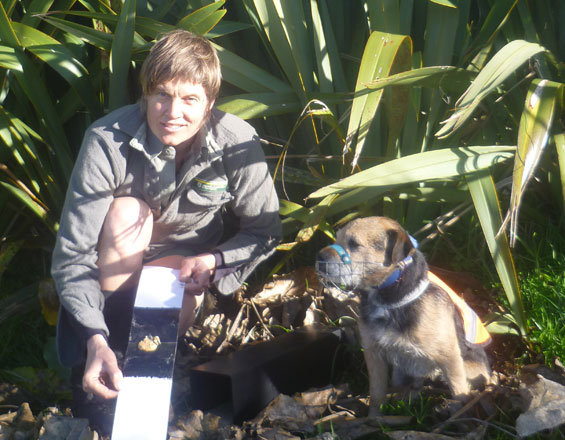 The Department of Conservation and Ngatiwai Trust Board worked together on "Project Restore" with the objective of removing this threat to the continued existence and recovery of the many threatened species that live on the island.

Monitoring was carried out in June 2012 and then again in May 2013 using rodent detection methods that consisted of tracking tunnels, rat traps, observations from people working on the island and rodent detecting dogs scouting the island. DOC Programme Manager Keith Hawkins says "After two years of no kiore being found we are confident that the eradication was successful. Two years allows for any kiore that may have survived the bait drop to have bred to detectable levels and be picked up by monitoring".

Evidence has shown that following kiore eradications from islands the number of tuatara and lizards recover quickly. DOC expects this will happen on Taranga Island, along with huge benefits to ecosystem regeneration.

Taranga has extensive historical features and holds spiritual significance to the Tangata Whenua of Ngatiwai. Taranga Island is part of the Hen and Chicken Islands group and is ranked as internationally important. A Nature Reserve, Taranga is strictly a 'no landing zone' to protect the rare and endangered flora, fauna and local endemics that are present on the island.

Now the island is kiore free, DOC urges boaties to be extra vigilant, ensuring they are not taking unwelcome guests out with them as that's the only way they can get there. Not storing food on your boat and having traps set on board are easy measures we can all take.