A series of rare bird releases have marked the launch of an ambitious new conservation project to bring some of New Zealand’s most threatened birds back to our internationally renowned Great Walk tracks.

A series of rare bird releases have marked the launch of an ambitious new conservation project to bring some of New Zealand’s most threatened birds back to our internationally renowned Great Walk tracks.

This weekend 10 kiwi have been released back onto the Rakiura/Stewart Island Great Walk track to join more than 50 threatened robins that were recently released near the start of the track.

More than 70 pateke (brown teal) were also released on Thursday in the Arthur Valley along the Milford Track Great Walk in Southland. 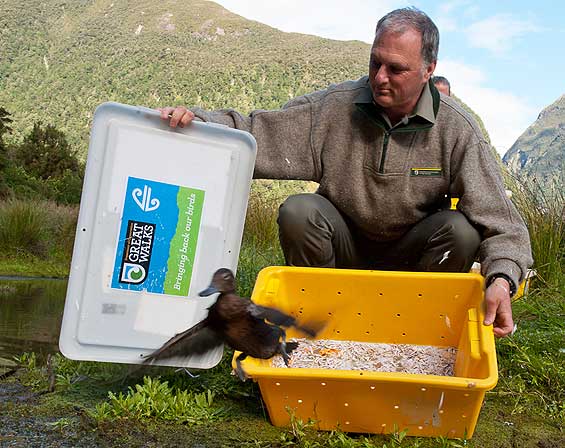 The releases are the result of a new $1 million partnership between Department of Conservation and Air New Zealand to restore bird life and habitats at sites along the network of tracks that make up DOC’s Great Walks.

Through habitat restoration and the creation of predator free zones, the Air New Zealand Great Walks Biodiversity project aims to enable the return of threatened birds that in some cases have not been seen along these tracks for over a century.

The project will also enable the tens of thousands of New Zealand and international visitors who each year take on the Great Walks to interact more easily with our unique birds such as kiwi, takahe, whio and kokako.

DOC’s Commercial Business Unit director David Wilks says imported predators like stoats and rats have driven many native birds out of our bush – even in the heart of our National Parks that provide the backdrop for our Great Walk network.

“This joint project will create pest free zones that will enable visitors to experience some our rarest birds first hand - it is a long term investment in both the environment and a key part of our tourism infrastructure.”

“Takahe, for example, have not been seen in the Milford Valley for well over a century – with Air New Zealand’s help we will bring these and a whole host of other unique birds back to their natural homes.”

“By helping to bring back these rare birds we can invest in the environment and our business at the same time.”

The Air NZ Great Walks Biodiversity Project has already initiated intensive pest control and species management work at sites along four of the nine Great Walk tracks – the Stewart Island/Rakiura Track, the Milford Track, the Routeburn Track and the Waikaremoana Round the Lake Great Walk.

The recent kiwi, robin and pateke releases mark the first translocations as part of the project’s long term species restoration plans. Over the next two years the Air NZ Great Walk Biodiversity Project will fund conservation initiatives that, along with restoring track habitats, also aim to: