The hihi or stichbird is one of New Zealand's rarest birds

The Practitioner Award was announced today by the Australasian Wildlife Management Society (AWMS) at their annual conference, currently being held in Palmerston North.

Dr John Ewen, a New Zealander working at the Zoological Society of London, is co-leader of the Hihi Recovery Group and is elated with the recognition for the groups efforts and says “New Zealanders should be very proud of the hihi conservation success story”.

Ewen says “The award recognises the leading role the group plays in endangered species conservation throughout Australasia. It is an endorsement of collaborative efforts between community, scientists and government. Our approach has made a positive difference to hihi. It’s about using science to make informed decisions on how we manage hihi.”

Lynn Adams agrees. She is a Technical Advisor with the Department of Conservation and co-leader of the Recovery Group. 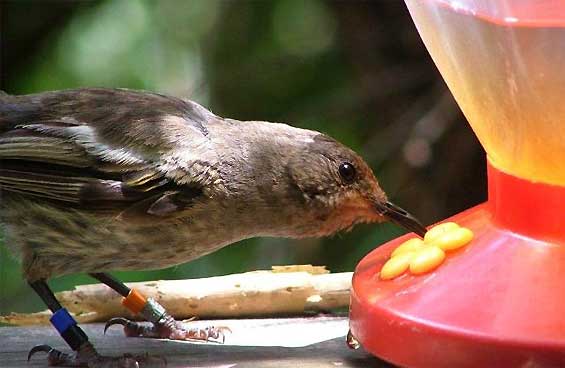 Adams says “The Group's management style has resulted in more populations of hihi. We’ve taken the number of populations from one to six over the last 33 years and we have set ambitious goals, including reintroduction to the mainland and community-based management”.

Adams spoke at the AWMS conference about hihi and concluded her presentation saying “The Hihi Recovery Group members are pretty proud to have won this award, but what we love the most is that hihi have been the real winners”.

All involved in hihi conservation will encourage more sites to join with hihi reintroductions to rebuild high numbers of this quietly spoken but most brightly coloured of New Zealand birds.