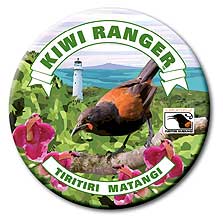 A family-focused conservation education programme will be launched at Tiritiri Matangi Island over Queen’s Birthday Weekend - for the first time giving Auckland kids the chance to be accredited as Kiwi Rangers.

To coincide with the Department of Conservation's launch of Kiwi Ranger at Tiri, ferry company 360 Discovery is offering a free child fare for every adult ticket purchased on either day of the long holiday weekend (Saturday June 1 to Monday June 3). Tickets can be purchased by phoning 0800 360 3472 or by using the promo code TIRIKIDSJUN13 online at the 360 Discovery website.

Actress, musician and conservationist Lucy Lawless will join the launch activities at Tiritiri Matangi, where visitors will have a chance to see the glorious kōkako, with its black mask and beautiful organ-like bird call.

Tiri is also home to the takahē, which for 50 years was thought to be extinct, yet now wanders freely around the island, as well as the puriri moth, New Zealand’s largest moth, whose grubs bore holes in puriri trees.

Children who complete the Kiwi Ranger activity booklet receive an official badge and certificate. Kiwi Ranger will be available on an ongoing basis at the island.

The Kiwi Ranger programme on Tiritiri Matangi Island was developed by Mick Abbott and Carli Richter of ‘Shades of Green’ in partnership with Supporters of Tiritiri Matangi Trust and supported by the Department of Conservation.

Until recently the programme has only been available at 10 conservation sites in the South Island. Plans are afoot for it to be included at other North Island sites including Footsteps of Toi near Whakatane, Te Uruwera National Park, Ahuriri Wetland at Napier, the Manawatu Gorge and Rimutaka Forest Park.

Although it’s specifically designed for children, Kiwi Ranger can also be completed by the young at heart.