Over 11,000 predators have been caught in the Tasman riverbed near Aoraki/Mt Cook National Park in the last seven years. 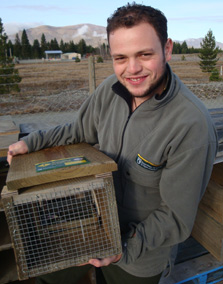 Over 11,000 predators have been caught in the Tasman riverbed near Aoraki/Mt Cook National Park in the last seven years.

This figure has been recently collated by Twizel Te Manahuna Department of Conservation staff, and it comes from 1400 traps operated in the riverbed and on the lower slopes of the surrounding mountains. The department has set up a large scale predator control project to protect riverbed wildlife.

“Hedgehogs are the most numerous predator in this area and will eat birds eggs, beetles, wētā, grasshoppers and lizards,” says Biodiversity Programme Manager Dean Nelson.

“They have also been caught at an altitude of 1000 m and can adapt to a variety of terrain be it riverbed or grassland.”

“Stoats are another problem for us as they will typically eat everything a hedgehog does but will also prey on young chicks and nesting adult birds as well. Unfortunately a lot of people are generally unaware of the devastation these animals can cause as hedgehogs are nocturnal and stoats tend to keep under cover.”

Stoats are concentrated around bush remnants in the Tasman Valley. Aoraki/Mount Cook village is a ‘hot spot’ for stoats due to the presence of Governor’s Bush and alpine shrublands.  Trap lines in this area are run by volunteers from the local community. 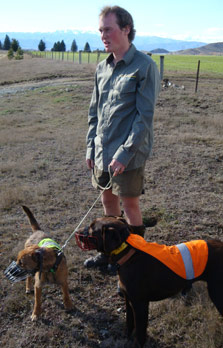 The number of cats caught (over 1500) is also an alarming figure as cats are very adaptable in what they eat and also highly mobile. These statistics don’t take into account spotlighting at night done either as part of rabbit control operations or specifically to target cats. It also does not include cats caught using a dog specifically trained to track cats.

“At certain times of the year, a ranger with a specially trained dog is able to locate often large, well-fed wild cats – some of which are older females. This method targets some of those felines that are ‘trap-shy’ and if we can get the females before they breed, that eliminates another generation of predators,” says Mr Nelson.

Ongoing liaison, support and access from landholders in the area has been extremely beneficial to the trapping project. To determine exactly how successful this project has been, a report is being written which collates all the trapping data and analyses the success of native riverbed birds breeding seasons.

“Ground nesting birds such as kakī/black stilt, wrybills, black-fronted terns and banded dotterels will all benefit from having these predators removed. A detailed evaluation of the project will inform us whether we can do things even better,” assures Mr Nelson.