The volunteer group Owhango Alive ran a successful open day with the theme of 'Presenting in the art of achieving optimal kills of predators'. Owhango Alive are trapping predators in areas around the Tongariro Forest. 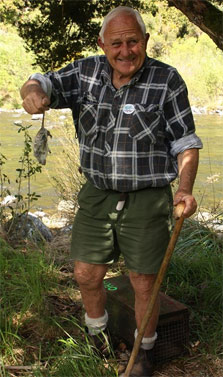 Whio, kiwi and forest birds are gaining further protection from local conservation volunteer group Owhango Alive who are trapping predators along the Whakapapa River and through the Ohinetonga Reserve, which both border the Tongariro Forest.

The group recently held a successful open day gathering 100 people who are already working in predator trapping, or were keen to get started. Many experts in predator trapping made presentations sharing in the art of achieving optimal kills of predators.

Generally stoats are seen as the number one predator enemy in New Zealand, particularly for their predation of kiwi and whio chicks, which is true. However ‘stoat expert’ Dr Carolyn (Kim) King from Waikato University  pointed out that "For small bush birds, rats are the number one predator, as for every 1-3 stoats in a 100 hectares of North Island forest in January there are 400-600 rats eating bird eggs and birds".

Kia Wharite predator trapping contractor Leon Stratford, also known as ‘Trapper’, talked about how servicing the mechanics of your traps is as crucial as servicing your car. Local eco-farmer Dan Steele from Blue Duck Lodge donated a self-setting rat and stoat trap to Owhango Alive. The group are delighted to have received $1,800 from the Horizons Regional Council Community Grant Scheme.

Whio ranger Alison Beath of the Department of Conservation talked about the success of doubling the local whio population from 44 to 88 pairs in 8 years. Kiwi ranger Jerome Guillotel added to his talk by a special surprise for the group, bringing a kiwi to be released in the Tongariro Kiwi Sanctuary. The group viewed ‘Turnstone’ the kiwi, and young 13 year old trapper from the group James Donnelly got to go out in the forest to release the kiwi with the rangers, alongside Owhango School student Lara Dempsey (12).

Owhango Alive chair person Mark Fredericks said "It was a great asset to gather all this knowledge to inspire our work. I am overwhelmed by the turnout to this event and we hope to make it an annual event".