A pair of rare New Zealand falcon nesting at Craters Mountain Bike Park in Taupo are bringing the community together to help them nest successfully. 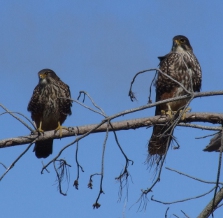 A pair of rare New Zealand falcon are nesting at Craters Mountain Bike Park – Wairakei Forest, swooping on prey, mountain bikers and performing fly bys for golfers. The pair are also swooping on the opportunity to raise their young with little threat of introduced predators.

Nesting just outside the predator proof fence that surrounds the Wairakei Golf + Sanctuary, the falcon are reaping the benefits of raising their young with less threat from introduced predators such stoats and cats which usually threaten their breeding success. 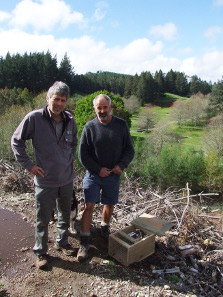 To further reduce that threat, community group Project Tongariro and the Department of Conservation have provided Bike Taupō, who manage the mountain bike park, predator traps which have been set near the nest.

Dave Lumley DOC Conservation Services Manager says "It is great to see a wide band of the community contributing to the continuation of a rare endemic bird".

Wildlife expanding into the community from a sanctuary area is a known positive spin off, such as kākā throughout Wellington City as a result of the Karori Sanctuary. Recognising this, Wairakei Golf + Sanctuary has partnered with the Department of Conservation and Greening Taupō to plant more trees in Taupō which will provide for the wildlife resulting from the protection.

This is the second season the falcon pair have bred at this site and it proves that the vision, investment and objectives Wairakei Golf + Sanctuary set in place in 2010 are showing results.

"Although the falcon predation of the bird population is significant, we are confident that the bird life enhancement programme will continue in and outside the boundaries of Wairakei Golf + Sanctuary," says course manager Nigel Lloyd.

The falcon are nesting next to the Walters Wiggles mountain bike track, so Bike Taupō have named the falcons "Mr and Mrs Walter". The falcons are known to defend their territory by swooping on passing mountain bike riders. With a helmet, bikers are protected from risk of injury, and can enjoy the close encounter with the extremely fast bird of prey.

"We are stoked that such an awesome species have chosen our park to raise a family, and value the joint initiative with DOC to protect the falcon" says Rowan Sapsford chairperson of Bike Taupō.

Capable of flying at speeds over 100 km/h and catching prey larger than itself, the New Zealand falcon is one of our most spectacular birds.