The Department of Conservation (DOC) has replaced a bridge on the Routeburn Track to cater for increased numbers of trampers using the track. 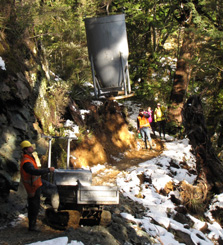 Wilson Contractors workers construct the base of a new section of track. The hopper full of gravel is lowered through the trees by helicopter then tipped into the power carrier. 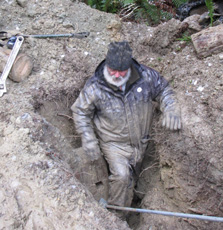 John Henderson checking the cable anchor of the Twin bridge 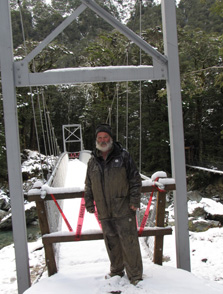 The Department of Conservation (DOC) has replaced a bridge on the Routeburn Track to cater for increased numbers of trampers using the track.

The new wider and stronger bridge just below the Routeburn Flats hut replaces an 18-year-old bridge built by the NZ Defence Force after major flood damage in the valley.

Two other bridges on the track, the Twin bridge and Sugarloaf Stream bridge, have been upgraded with new deadman anchors, decks and handrails. The bridge work is being conducted by John Henderson Construction of Glenorchy.

Several sections of the track are being upgraded and work by the contactors, Wilson Contractors Ltd, is continuing despite recent snowfalls.

A 180m section of track near the Routeburn Flats hut is being re-aligned, and a 2384m section between the Flats and Falls huts is being upgraded, resurfaced and new culverts and drainage installed.

A 120m section below Falls hut is being upgraded with new timber edged retaining and gravel to address problems of water erosion.

The track will remain open during this work but there may be short delays at the bridges.

Within the next few months, work will begin on a day shelter at the Routeburn Flats hut to accommodate the high number of day walkers to the hut (it is only a two-hour walk from the Routeburn Roadend). The septic sewage system will also be upgraded at the Falls hut.

Meanwhile, on the Rees-Dart Track, the bridge across Snowy River has been removed for the winter. This is an annual event that prevents the bridge being damaged by avalances over the winter. It is usually replaced in November, depending on snow conditions. Several kilometres of track are being realigned in the lower Dart Valley, due to flood damage in January.