The discovery of a kiwi chick born on Marlborough Sounds' Orua Wairua (Blumine) Island could secure the future for the world's most endangered kiwi - the rowi.

The discovery of a kiwi chick born on Marlborough Sounds' Orua Wairua (Blumine) Island could secure the future for the world's most endangered kiwi - the rowi. 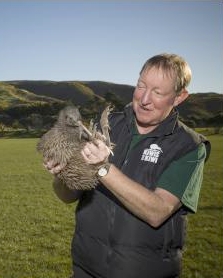 The as yet unnamed chick was transferred this afternoon by the Department of Conservation (DOC) to Mana Island - a predator-free kiwi sanctuary off the Kapiti Coast -joining other rowi, in the hope it will one day breed.

"With an estimated one third of rowi unproductive and with the population down to just 80 breeding pairs, this precious chick could literally ensure the survival of the species," says Ms Impey.

It is the first kiwi born on Blumine Island since the transfer of five unproductive kiwi pairs from the Ōkārito Kiwi Zone on the West Coast of the South Island two and half years ago. The kiwi pairs were relocated in the hope that the warmer climate and food-rich soils of Blumine Island might stimulate fertility.

Ms Impey also commented that the chick's hatching is a salute to the power of public concern.

"The transfer of the rowi pairs to Blumine Island was funded by public donations; from people who understand that a future New Zealand without our namesake is unthinkable.

The Trust is calling for donations now to help secure a future for rowi and other kiwi around New Zealand. People wishing to help can go to the Kiwis for kiwi website to make a secure, online donation.

"While we are celebrating this chick's arrival, we have a long way to go before the rowi population is stable and further donations are urgently needed," says Ms Impey.

DOC's West Coast Area Manager, Wayne Costello commented that it was the first time kiwi pairs had been taken out of their natural environment in order to stimulate fertility.

"We had a hunch that the move from Ōkārito to the Marlborough Sounds may shake things up a little for the old pairs. Although kiwi mate for life, a major shift in habitat can result in re-partnering as they re-establish territories.

"Happily, this does seem to be the case. We are fairly sure that the chick is Stealth's - a female who partnered with Norman after her long-term mate, Nightcrawler died. This leaves Norman's ex, Jean out in the cold but as with humans, she may find someone better!"

DOC will genetically test the chick shortly to establish whether the chick is male or female.

The public are invited to name the chick. To enter, go to the Kiwis for kiwi website. The best name will be chosen by West Coast Māori, Makaawhio Runanga.

Two iwi in the South Island, Ngati Mahaki ki Makaawhio and Te Atiawa, have supported the translocation to secure the rowi's future. Each iwi have provided support and blessing at all stages along the path of rowi recovery.

The transfer has also been supported by Interislander ferry company who have provided free passage between Picton and Wellington for the rangers and the birds.

The transfer to Blumine Island is part of the National Kiwi Recovery Plan to increase the population of rowi to 600 by 2018.

The release of kiwi on Blumine Island is the result of a partnership between Kiwis for Kiwi, Department of Conservation and The Untouched World Charitable Trust. The partnership has achieved greater understanding of biodiversity and implements a combined education and conservation programme with a focus on youth leadership for the future.

Blumine Island is a scenic reserve that is open to visitors all year round. At just over 400 hectares, it is the largest Marlborough Sounds island reserve, situated in outer Queen Charlotte Sound, about an hour's boat ride from Picton.

Part of the island was extensively cleared for agriculture in the past but now is clothed in regenerating native forest. A 2005 DOC rodent eradication operation and stoat trapping cleared the island of introduced predators paving the way for the restoration of the island's wildlife. Students are involved in monitoring the island's ecological restoration through educational programmes supported by Untouched World Charitable Trust and the Canterbury University College of Education.

Untouched World Charitable Trust's programmes has seen more than 500 senior secondary school students and teachers from Marlborough and Canterbury participate in supporting the conservation efforts in 23, week-long visits to Blumine Island since 2002.