The day was an emotional one for the more than 50 Ngati Kura hapu and local Matauri Bay community members who came. 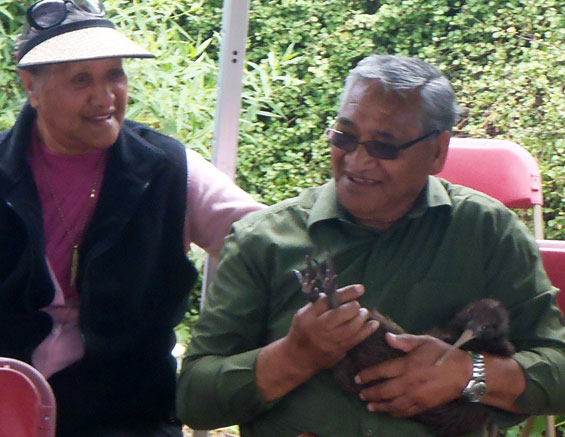 Nau Epiha (Ngati Kura kaumatua) holding one of the kiwi

Nau Epiha, Ngati Kura kaumatua said "It's great to welcome the kiwi back as our tuakana (senior to our ancestors); the kiwi are our manawhenua."

The whole Matauri Bay community turned out to welcome the birds home. Tamariki from Te Kura Kaupapa Maori o Whangaroa and Matauri Te Ohonga Reo and school children from Matauri Bay Primary School travelled with the kiwi by boat from Matauri Bay to Motukawanui Island to help introduce the birds to their new home.

"It was very educational, so good to see all the generations out there seeing it happen. The youngest being seven weeks old!" said Mori Pera, Ngati Kura whaea.

Kiwi were first released on Motukawanui in 1995 in an early Operation Nest Egg (ONE) project. The original ten North Island brown kiwi came from eggs rescued from a variety of backgrounds: Whangarei, Waitangi, and elsewhere in Northland. The birds were raised in captivity then released onto Motukawanui in an attempt to create a protected island population to help reduce falling kiwi numbers on the mainland.

Cinzia Vestena, Far North District Office DOC Conservation Services Ranger says "Kiwi have thrived on Motukawanui since 1995 thanks to the diverse habitat and lack of predators such as stoats and dogs. In May 2004, about half of Motukawanui Island was surveyed for kiwi. Eight kiwi were found using a kiwi dog. The kiwi were in good condition and about 50-60 birds were estimated to be living on the island at that time. It is likely that there are about twice as many kiwi on the island now."

Cinzia says "It is expected the five captive kiwi we have recently introduced to the island will breed with the resident kiwi and add their genes to the mix. Motukawanui is a beautiful place which is popular with locals and visitors during the summer.

"Unfortunately dogs are the main killers of kiwi in Northland and its off-shore islands. Kiwi can have their burrows in the thick grass just behind the beach and around Motukawanui's DOC hut, so any dog walking on the beach could be attracted by their strong smell.

"The public can help these amazing birds survive in their new island home by not bringing dogs ashore."

Kiwis for kiwiTM is the trading name of The Kiwi Trust. Established in October 2012, it continues more than two decades of work by BNZ Save the Kiwi Trust to help protect kiwi and the places they live. Kiwis for kiwiTM raises and distributes funds to community, DOC and volunteer groups helping save kiwi throughout the country.

BNZ Operation Nest EggTM is a powerful tool to reverse the decline of kiwi populations. Eggs and chicks are harvested from nests to save them from stoats and cats. The young kiwi are returned to the wild when they weight about 1kg, big enough to fight off these predators. More than 2000 kiwi chicks have been returned to the wild since its inception in 1994, with captive facilities and hundreds of field workers from DOC and community groups throughout the country contributing to its success

Kiwis for kiwiTM works in partnership with the Department of Conservation (DOC) with a vision to take kiwi from endangered to everywhere.