An Ashburton man has been successfully prosecuted by the Department of Conservation for damage to a nesting colony of endangered black-billed gulls (tarāpuka).

An Ashburton man has been successfully prosecuted by the Department of Conservation for damage to a nesting colony of endangered black-billed gulls (tarāpuka).

Samuel John Townhill pleaded guilty in the Ashburton District Court today to charges of destroying nests and disturbing a protected species when he drove into the large colony on the Ashburton/Hakatere riverbed in November last year.

Her Honour Judge Maze stated the importance of these particular gulls and their exclusive use of braided riverbeds made the preservation of them a responsibility we all share, including the defendant. 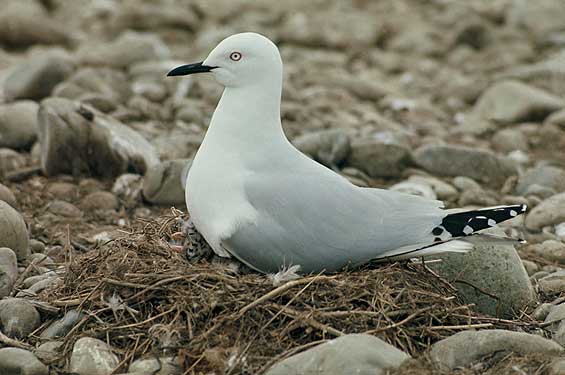 Judge Maze sentenced Townhill, who is currently imprisoned on other matters, to one month's jail cumulative on his current sentence under the Wildlife Act.

The offending occurred when, drove his vehicle into the colony near Tinwald Bridge, crushing eggs and distressing the nesting birds.  Further nests were destroyed when Townhill was asked to move his vehicle out of the colony by police.

The incident is likely to have had a significant impact on the gull colony, which that year made up 11% of the total black-billed gull population, said DOC Raukapuka Area Office Manager George Hadler.

“Not only were eggs destroyed but the disturbance of adult birds would probably have caused other nests to fail.”

“We don’t know the exact numbers lost but this unnecessary mindless act would have had a serious impact on the colony.”

People killing and disturbing black-billed gulls is a real threat to the species and is unacceptable, as this prosecution shows, said Hadler.

In 2007 more than 100 adult birds were killed by vandals at the same site on the Ashburton riverbed, while in December last year some 50 chicks were killed in an incident on the Ashley River/Rakahuri north of Christchurch.

Black-billed gulls are found only in New Zealand and are classified as ‘nationally endangered’due to concern about their rate of decline and risk of extinction.  Most of the population (95%) breeds on South Island riverbeds.

Black-billed gulls or tarāpuka (Larus bulleri) are the only gulls that breed inland on braided rivers.  They are smaller and more delicate than the common red-billed gull or larger black-backed gull, with white plumage and greyish wings with black tips.  Mature gulls have black legs and beaks.

The population—estimated at approximately 90,000 in 2008—has declined by 85% over the last 35 years.  Key threats include introduced predators and human disturbance.

Nearly 10,000 birds were recorded in the colony near the Tinwald Bridge last year, which represents 11% of the total population of the species and 92% of those nesting on the Ashburton River. ‘Endangered bird’ warning signs were located near the colony, which is locally well-known.

People can help black-billed gulls to survive by leaving nesting colonies alone during the breeding season (September-January) and keeping dogs on leads.  Please report anyone seen disturbing or harming birds to the DOC HOTline (0800 364 468).

Disturbing protected birds and destroying nests are offences under the Wildlife Act and can result in imprisonment of up to six months or a fine of $100,000.

New Zealand's only endemic gull is the most threatened gull species in the world, and it's rapidly declining.