A panel of scientists has produced the first list that records the conservation status of every known New Zealand native vascular plant.

A panel of scientists has produced the first list that records the conservation status of every known New Zealand native vascular plant.

Vascular plants have lignified tissues for conducting water and minerals throughout the plant. They include flowering plants, conifers, ferns and clubmosses.

A panel of scientists from the National Institute of Water and Atmospheric Research (NIWA), Landcare Research, Auckland Museum Herbarium, the University of Canterbury School of Forestry and the Department of Conservation (DOC) conducted the conservation assessment in May last year.

The new listing has now been published by DOC, sponsors of the threat review process, that’s carried out every three years.

The increase in the number of plants assessed is due to an increase in our knowledge of New Zealand’s native plant life.

For example when the 2008 assessment was conducted scientists thought there was just one species of Cook Scurvy Grass (Lepidium oleraceum). New research recently published recognises that there are 11 new species of Cooks Scurvy grass, all split from the single species that was previously recognised. 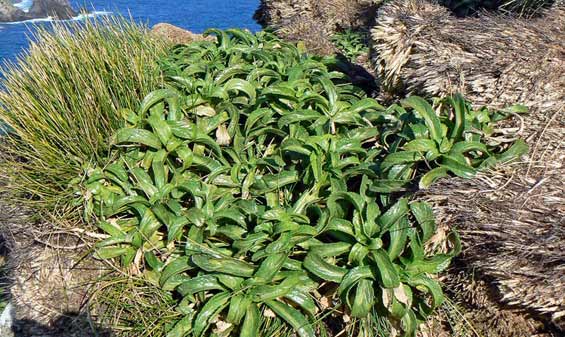 Lepidium limenophyla, one of the new species of Cooks Scurvy Grass. Photographed on North East Island, one of the Snares Islands, 200 km south of New Zealand.

A total of 243 plants were listed as threatened in 2008. This has increased by 46 to 289 in the 2012 listing. This is due to a number of factors. These include the fact that an extra 50 plants were assessed in 2012 plus a range of environmental factors. These include loss of habitat, browsing by pest animals such as possums, rabbits and goats, the spread of plant diseases and competition from weeds.

"The number of plants on the threatened list highlights the need for agencies, such as DOC, councils, Landcare Research, NIWA, universities and museums to work together with farmers, developers, iwi and community groups to ensure we are protecting our threatened plants," says Dr Peter de Lange, DOC Principal Science Advisor and the senior author of the new threat list.

"The knowledge gained from the listing process is being used by DOC, councils, iwi, the private sector and community organisations to carry out conservation programmes throughout the country that are benefiting our native plants and the wildlife they support,"says Dr de Lange.

This is shown by an improvement in the threat status of 20 native plants on the latest threat list as the result of conservation management, improved knowledge of the plants and finding new populations of the plants.

An example of a native plant being brought back from the brink of extinction is the Kermadec koromiko (Hebe breviracemosa), a shrub found only on Raoul Island. It was thought to be extinct due to browsing by goats. A single plant was discovered on Raoul after goats were removed from the island in 1983. Clearing rats from the island in 2004 accelerated the plant’s recovery. There are now around a thousand adult Kermadec koromiko plants on a number of sites spread across the island.