DOC divers were concerned to find a koura (freshwater crayfish) trap in the water while they were working on eradicating lagarosiphon (oxygen weed) at Lake Waikaremoana. The potential for such devices to introduce the weed to the area is alarming. 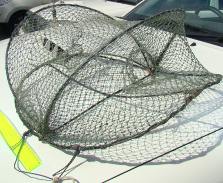 Department of Conservation divers recently found a koura (freshwater crayfish) trap in the water while they were working on eradicating lagarosiphon (oxygen weed) at Lake Waikaremoana. 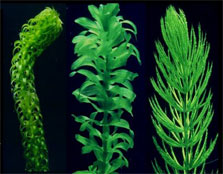 Lagarosiphon Project Manager, John Adams and Dr John Clayton from NIWA both expressed serious concern about the find, “which is a big worry as it really increases the potential for aquatic plants to be introduced into the area” from neighbouring lakes and streams.

Furthermore, Lake Waikaremoana sits in Te Urewera National Park and it is illegal for the public to use a koura trap, or any artificial device for the purpose of catching indigenous species in a ntional park.

According to John Adams, any net or trap poses a threat to the freshwater environment at Lake Waikaremoana because it is so easy for fragments of aquatic weed to be caught and subsequently transported to the lake. A small 2-3 cm piece of lagarosiphon is all it needs to establish the plant in a new site.

Since lagarosiphon was re-discovered in Te Raoa Bay at Lake Waikaremoana, a careful survey of the lake revealed several more patches of the noxious weed.

During the last 12 months a rigorous eradication programme has been in place. A team of divers have been working through all weathers to rid Lake Waikaremoana of the fast growing weed, which has the ability to outgrow all other aquatic vegetation in the lake.

John Adams is confident that they are making headway against the weed. This week the dive team only found 350 plants at Te Raoa Bay, compared with 700 on their last visit. However, it will be a long, slow process and the more the public are aware of the dangers of bringing anything to the lake that has not been carefully cleaned, then the easier it will be to make progress.

Until recently, the Department of Conservation thought the most likely places for concealed weeds would be anchor chains, warps and wells, bilges and any other cavity that would hold moisture, such as fishing nets and lines. The discovery of the koura trap highlights another potential source of infestation. Department of Conservation Biodiversity Programme Manager, Nic Doney, is keen to get the message out to the public that koura traps should be kept well away from Lake Waikaremoana, and boaties and fisherfolk could really help keep the lake clean and clear of invasive weed by remembering to 'check, clean and dry' their gear before heading for the lake for a spot of fun, rest and relaxation.