Cats have been caught on camera entering Fiordland National Park. Students from Te Anau School and Fiordland College set up the night sensor cameras as part of a LEARNZ field trip focusing on the Kids Restore the Kepler project.

Cats have been caught on camera entering Fiordland National Park confirming the suspicion that cats are using the Te Anau Control Gates to gain access to the Kepler.

Students from Te Anau School and Fiordland College set up the night sensor cameras as part of a LEARNZ field trip focusing on the Kids Restore the Kepler project. Overnight, several photos were captured of large cats on the Control Gates, much to the surprise of the kids tasked with downloading the footage the next day. 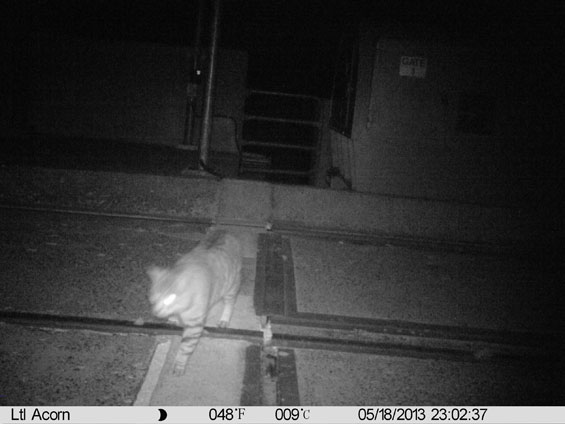 Nick Humphries, who is on the leadership team for Kids Restore the Kepler was one of the students involved in the surveillance work. "We were wondering how the cats got in there so set up these cameras to see if they were just walking in."

The suspicion that cats may be entering the National Park in this way arose following baseline monitoring that found cat scat (poo) in the vicinity of the Control Gates and Rainbow Reach entrances to the track. This is obviously of great concern as the area is the focus of a major restoration project and cats pose a very serious threat to New Zealand's native wildlife.

"From here we have several options that we will need to look at to prevent cats from entering the park," Nick said. "One of these is to educate people, especially those living near to the Control Gates, to keep their cats in at night".

In 2006, a fence was removed from the Control Gates and Rainbow Reach swingbridge. This fence was not predator proof but instead confused some visitors who thought the park was 'closed'. Installing cat-proof fencing may be an option that needs to be considered by the Kids Restore the Kepler leadership team.

As well as capturing cats, the camera footage also picked up a person walking their dog and a couple of mountain bikers. The Department of Conservation would like to remind people that dogs and bikes are not allowed in the National Park.

Videos of the surveillance work along with many other activities the students from Fiordland College, Te Anau and Mararoa Schools got involved in during the LEARNZ field trip, will be available to view soon on the Kids Restore the Kepler website.