In a rare move, endangered kakī/black stilts have been released in Lake Tekapo township, alongside a popular walking track.

In a rare move, endangered kakī/black stilts have been released in Lake Tekapo township today, alongside a popular walking track.

Traditionally Department of Conservation (DOC) rangers have released kakī nearly 20 km away from the town at sites closer to Lake Tekapo. To the delight of local residents and DOC staff, 31 juveniles and two adult kakī strode out amongst the tarns on Cowans Hill Walkway, a walking and cycling track in the town.

“We have taken a bit of a risk but it will be great for the Lake Tekapo community to have an iconic Canterbury bird on their doorstep,” explains DOC ranger Simone Cleland.

“Residents in Lake Tekapo will be able to direct tourists to the site and we will have a DOC ranger feeding these released birds. This means they should stay in the area for up to six weeks before flying to riverbeds in Mackenzie Basin.” 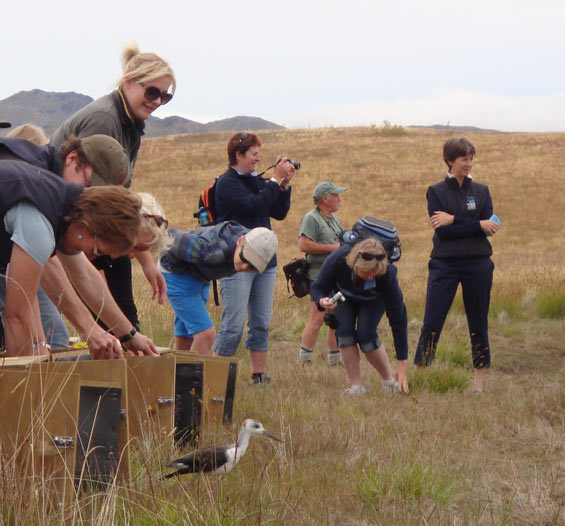 Today’s release is expected to provide spin-off opportunities for the community and for conservation. It could create a short-term tourist attraction, provide control of pests close to the town and complement the kakī promotion being undertaken by the Tekapo Springs hot pools complex. It allows for more people to find out about this wading bird with a chance to spot them up close.

A trapping programme will operate around the release site on Cowans Hill Walkway, targeting stoats, ferrets and weasels. Havahart traps will also be in place to catch wild cats, while domestic cats will be released away from the area.

“We are asking for a bit of community buy-in – locals can help by keeping their cats well-fed at home, and possibly locked inside at night.”

“And our predator control rangers can easily tell a wild cat from a domestic one so any pets caught will be unharmed,” assures Ms Cleland.

“Dogs are required to be on lead on Cowans Hill Walkway so they should not pose a risk to kakī. The track is very busy with walkers and mountain bikers throughout summer so keeping dogs on lead is a commonsense approach anyway.”

“It has been a very successful breeding season for adult kakī in Mackenzie Basin. We have raised 125 chicks at the DOC Captive Breeding Centre in Twizel. Over 90 young birds will continue to be kept at the centre until they are released into the wild in winter/early spring,” said Ms Cleland.

Kakī are an endangered wading bird found only in Mackenzie/Waitaki region. They tend not to migrate, although some birds will show up in coastal or wetland areas in South Canterbury.

Kakī were once widespread throughout New Zealand and are now generally confined to high country riverbeds. Kakī population numbers have been managed since 1981. They were identified as at risk by staff of the New Zealand Wildlife Service.