Joint venture between DOC and iwi

A new Department of Conservation office and community house complex to be built in Taupō took a step closer with the signing of a memorandum. 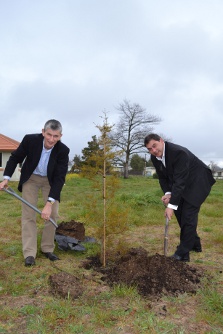 A new Department of Conservation office and community house complex to be built in Taupō took a step closer with the signing of a memorandum of understanding between the department, and the Tauhara hapu of Ngāti Tūwharetoa, in conjunction with the Opepe Farm Trust.

The new office and community whare complex will be built on the public conservation land between Motutaiko and Kaimanawa Streets, behind Waiora House and will accommodate up to 43 DOC staff.

The signing of the MOU was the culmination of nearly two years work between the Tauhara Hapu Working Party, of Matiu Heperi Northcroft, Heemi Biddle and Anne Clarke, having also been importantly supported by Kaumatua Ratana Wall and Hoani Urukanoa Haimona, and DOC's Mark Davies and Herwi Sheltus.

Temuera Hall said "it has been an adventure getting to today, and we look forward to the next phase of this partnership journey".

"We are all working together to protect this environment. In this area we have an abundance of nature's best, so we want to thank you for choosing this place for your new office, for locating senior roles and staff who are here to look after our special places, by ensuring that the taonga-tuku-iho (bequeathed gifts) that define Ngati Tuwharetoa Iwi, hapu and people, are not encumber yet allowing benefit for all of Aotearoa and its visitors", he said.

Mr Hall also said he believed that the building will need to recognise all the iwi from the central north island as their taonga will be partly administered from this office. "This facility here in Taupo will be a meeting place of all the iwi in the central region."

Deputy Director General Conservation Services Kevin O'Connor said it was a very important day for the department and a significant step in working with others, which was the new direction DOC was moving in.

"This project is very symbolic of the department's long term commitment here in Taupō, we are here for the long haul and want to work with iwi and the community.

He congratulated the Tauhara Hapu Working Party and the Opepe Farm Trust for their generous and lateral thinking. He described the project and relationship as very progressive, and said the project was a very inclusive model, and one that the department would use again.

"The vision was for us to be able to work in an integrated way with iwi. And with a shortage of community buildings this project will not only provide a great working space for our staff but also a whare for iwi and community groups to come together.

"There are exciting times ahead and I congratulate the vision and the people who made it happen," Mr O'Connor said.

The next stage of the project is for the Opepe Farm Trust to let the building contract which is expected to be in the next month and construction is expected to start sometime in late October . The building is due to be completed by June 2014.

The new complex comprises two main buildings; the office block which is an H shaped building with the entrance off Motutaiko Street and the community house which has full kitchen, two offices and meeting space for up to 60 people. The entrance to this building is off Kaimanawa Street.

At least half of the staff bound for the new building have temporarily moved into the White House in Paora Hapi Street in Taupō while the rest are working from their current locations until the new building is completed.