A generator that ran an early hydro-electric plant near Skippers has been preserved.

A generator that ran an early hydro-electric plant near Skippers has been preserved. 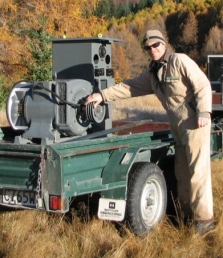 Richard Struthers with the restored generator 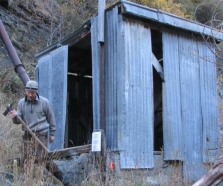 The generator house which will soon be restored

The Department of Conservation (DOC) gave Invercargill electrician Chris Traynor permission to restore the 80-year-old generator, and recently re-installed the equipment back into the corrugated iron shed that houses it. The generator house will be restored by DOC next summer and an interpretation panel installed.

DOC works ranger Richard Struthers said the equipment was historically significant because it was an excellent example of early electrical heritage. It wasn’t the original generator at the site but was the same as the machinery that drove the Sandhills Dredge which operated in a tributary of the upper Shotover River in the 1890s. This was the world’s first dredge to be powered by hydro-electricity.

Mr Traynor said it took a few months of work by him and his workmates to repair and restore the generator and switchboard. He decided to tackle the job because he had enjoyed spending lots of time in the Skippers area since he was a child and wanted to give something back to the area. As well as protecting the gear, he wanted to provide an interesting historic relic for visitors to look at.