The current spell of hot weather is taking its toll on the Northern Royal albatross colony at Taiaroa Head, and sprinkler systems are being deployed to cool heat stressed birds.

The recent hot weather and forecast of more to come is bad news for the Taiaroa Head albatross colony.

Currently the chicks of this year's breeding population are hatching. This is the most intense period for both birds and the DOC staff managing the population. Hatching can be a long process with some chicks taking 7 days to fully complete the hatch from pipping until the chick is out of the egg. Heat stressed adults can accidentally crush eggs or chicks, and expose eggs and chicks to the full intensity of the sun. Chicks are also more vulnerable to fly strike in the heat. 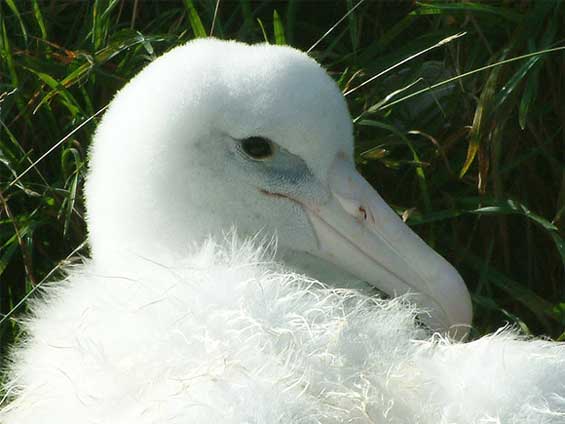 Minimising these risks results in intensive management and long 12 hour days for the DOC staff. In the 1990s, after the loss of both adult breeding birds and their chicks from heat exhaustion, DOC installed an irrigation cooling system. The system is a water line that sprays cold water over the nesting adult. The bird is cooled, causing a natural response of the adult to settle back on its egg or chick. This significantly reduces the high risk of fly strike for hatching eggs or young chicks. This system is now used for nesting birds during hot conditions.

Last week, for the first time this season, the irrigation lines were turned on to all the nests after adults birds showed signs of heat stress leading towards heat exhaustion. One young chick became extremely heat stressed after its mother exposed it to the full heat of the sun. DOC Ranger Lyndon Perriman carried the chick with him during his monitoring rounds for 30 minutes, and then placed it in an incubator until its mother had resettled at the nest once her body temperature cooled.

Last week, an adult albatross identified as lime-green-blue (LGB) was found dead facing downwards in long grass. LGB was a young non-breeding female that returned to the colony on Tuesday (22 January), her first time back to Taiaroa Head four years after fledging. Non-breeding birds are not tied to a nest, and so whenever the temperature rises they tend to fly to sea. A day after returning to Taiaroa Head, LGB was found caught up in rushes and panting hard. DOC Ranger Lyndon moved the bird to a flat area where she could easily take off from and return to sea. A check of the area where LGB was released an hour later failed to find any sign of her. She was found dead the following morning by DOC staff.

Currently 16 chicks have hatched, with 7 others hatching and another 4 should start hatching next week. 3 of the current 16 chicks have been found with maggots feeding inside their umbilicus. Maggots can lead to infection entering the body cavity and therefore reduce the chances of these 3 chicks surviving. Maggots are removed from chicks with tweezers and antiseptic.