The Department of Conservation is seeking public feedback on a proposal to establish a conservation park on Aotea/Great Barrier Island.

From Thursday 5 December 2013 until 28 February 2014, the Department of Conservation is seeking public feedback on a proposal to declare a conservation park on Aotea/Great Barrier Island.

The Aotea Conservation Park proposal covers 12,100 ha and includes stewardship land on the island managed by DOC under the Conservation Act 1987. DOC manages 60% of the island's land, and a large portion of this currently carries the relatively low protection "stewardship area" status. 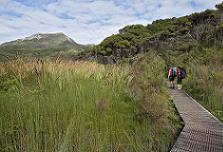 Boardwalk through the Kaitoke wetland, part of the proposed Aotea Conservation Park

"Aotea/Great Barrier Island is a unique environment with an amazing diversity of native flora and fauna.

"From DOC's perspective, the conservation park proposal appears to be a win-win for the Barrier, with no impact to private land or the day to day operations on the island. Conservation park status ensures better protection for these natural and historic resources, and also increases opportunities for public recreation and enjoyment of these features.

"With the submission process we want to hear what local residents and the wider community think of the proposal."

In August 2013, a report from the Parliamentary Commissioner for the Environment Dr Jan Wright identified numerous areas of DOC estate that have significant conservation value, yet have the relatively low stewardship area status. In response to this report, the Minister of Conservation directed DOC to investigate changing the status of stewardship areas on Aotea/Great Barrier Island as high priority work.

It predicts the park's higher protection status will also increase awareness about the land's unique natural, historic, cultural and recreational values, and tourism opportunities for public access and outdoor recreation.

The proposed conservation park area mainly covers the central and northern parts of the island, and includes the already protected Hirakimata-Kaitoke Swamp Ecological Area and Wairahi Forest Sanctuary. These unique habitats retain their original classification while also being part of the Conservation Park area. The proposal does not impact private land or Maori-owned land, nor does it preclude the use of land for future Treaty settlements.

Following the close of submissions on Friday 28 February 2014, DOC will hold hearings for any submitters wishing to be heard. DOC will then analyse all submissions and hearings evidence, before preparing a report with recommendations for the Minister of Conservation, who will make the final decision.