New Zealand’s green geckos will be given greater protection against smuggling following a decision at the Convention on International Trade in Endangered Species (CITES) conference in Bangkok, Minister of Conservation Nick Smith announced today.

Date:  15 March 2013 Source:  Office of the Minister of Conservation 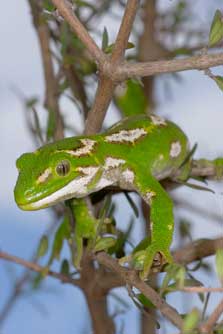 New Zealand’s green geckos will be given greater protection against smuggling following a decision at the Convention on International Trade in Endangered Species (CITES) conference in Bangkok, Minister of Conservation Nick Smith announced today.

All nine species of New Zealand geckos listed in Appendix III under CITES will transfer to Appendix II, making the export of wild geckos from New Zealand for trade on the overseas market without the proper authority completely illegal. Those trading in green geckos who claim their animals have been bred in captivity will have to provide concrete evidence, making it much more difficult to launder poached wild specimens.

“I’m thankful for the overwhelming support that the international community has given New Zealand in its efforts to protect our native wildlife from smugglers. This increase in protection means international authorities will have greater power to conduct enquiries and investigate illegal activities. It will also mean harsher penalties under international law for people found to be illegally trading in our geckos,” says Dr Smith.

“Green geckos are found nowhere else in the world and have been targeted regularly in recent years due to the high value placed on them by collectors fascinated with their bright colour and striking markings. The Government has responded by promoting tougher penalties for smugglers caught on our shores under the Conservation Law Reform Bill, which I hope to pass this year.

“It’s important we send a message that our endangered wildlife is off limits and thanks to the assistance of the international community we are now in a stronger position to deter would-be smugglers from trying to pilfer our valuable wildlife.”

New Zealand submitted the proposal to the CITES Secretariat in early October 2012. It was accepted by consensus at the International CITES conference in Thailand and confirmed this week.

Learn more about the types and species of geckos found in New Zealand.